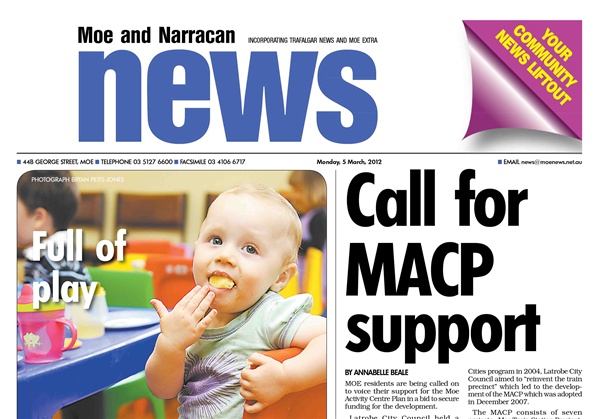 MOE residents are being called on to voice their support for the Moe Activity Centre Plan in a bid to secure funding for the development.

“I think there have been some people within the community who have been opposed to the project from the start, and have been quite vocal about that, but the majority of the community can see the benefits it will bring to Moe,” Ms Price said.

“At the moment they (both governments) are getting messages from the community that this is a waste of money and the money would be better spent elsewhere.

“We believe they are a minority, that is why we would like the majority of people to voice their views that this is a fantastic project.”

Following Moe being identified by the State Government in the Transit Cities program in 2004, Latrobe City Council aimed to “reinvent the train precinct” which led to the development of the MACP which was adopted in December 2007.

Ms Price said the MACP had faced challenges, including delays with the change in State Government and community groups opposing the plan.

“Council would have never got to the point of demolishing shops if they believed the community wasn’t supportive of it or if they believed it wasn’t going to have significant benefits to the town,” she said.

Ms Price said the “ball is in the State Government’s court” to start the construction phase.

“At present the detailed design plan is drawn up; as soon as council has commitment for funding we will be ready to go,” she said.

Master of ceremonies throughout the breakfast was Committee for Moe president Manny Gelagotis who reiterated a clear message to attendees it was “time to work together”.

“Nothing will ever happen if we don’t get on with it and communicate (with stakeholders),” Mr Gelagotis said.

“We certainly need to support it, this project is exciting for Moe and could change the town forever.”

Mr Gelagotis spoke of communication challenges which had delayed the project coming to fruition.

“For a project that started in 2004, we should be disappointed that it hasn’t been completed, for whatever reasons,” he said.

“But it is time we (community groups) get our act together and support this project.

“There needs to be a togetherness in the community to be able to move forward, the overall message is that we need to communicate and work together.”

Mr Vermeulen praised C4M efforts to support the project which aimed to work as an “umbrella” community voice.

He said the project was not going to be completed “tomorrow” but assured the community council were “onto it”.

State Member for Narracan Gary Blackwood said he had been pushing for community groups to work together.

“I think it is very important that all Moe community groups do work together,” Mr Blackwood said.

“There will always be difference of opinion, but it will be better to sit down and work together to try and benefit the broader Moe community.

“There has been some concerns raised with me but there has also been a lot of positive comments made about the project.”

Mr Blackwood said he supported the MACP and was in consultation with Regional Development Victoria and council to establish government grant applications but could not comment on when they would be finalised.

“We want people to move to Gippsland, we want people to look at towns like Moe and see they are attractive and beautiful places to live in, to do that we need to keep investing in new projects,” Ms Aldred said.