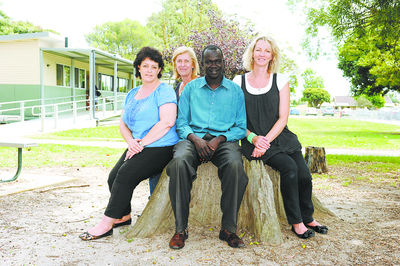 TWENTY-three years was a long time to be away from his country of birth, but when Reverend Abraham Maluk returned to Sudan in 2010, instead of filling with joy, his heart sank at the sight of emaciated children battling for survival.

In his hometown of Bor in Southern Sudan, Rev Maluk was dismayed by the sight of children trying to build homes and schools for themselves, foraging for food and often unclothed.

“There are thousands of orphans in Bor,” Rev Maluk said.

A former “Lost Boy” of Sudan himself, Rev Maluk lived in refugee camps for many years and only began school at prep level when he was 21 years old.

Today, with a degree in social welfare under his belt and a Masters Degree in International Relations well underway, Rev Maluk is passionate about finding a way of helping children who – like him, many years ago – need an opportunity at education.

Rev Maluk and a group of passionate volunteers are now looking to raise up to $150,000 to build an orphanage and boarding school for the homeless children of Bor.

The Bor Orphanage and Community Education Project aims to break the cycle of poverty through education, and hopes to raise the funds through donations from corporations, foundations, churches, schools and individuals.

“The land for the school has been donated by the government,” Rev Maluk, who is also the executive director of BOCEP, said.

He said the funds would go towards building the school, which would eventually be supported and sustained by the local community.

“Right now, there are no proper teachers; often it is just the older children trying to teach the younger ones,” he said.

On 15 March, BOCEP will hold a movie screening of War Child, a film by Emmanuel Jal, a former child soldier in the second Sudanese Civil War, at Lowanna College, Newborough.

The two-hour movie will be accompanied by a question and answer session and a spread of Sudanese food.

“The movie is about the challenges faced by a former Lost Boy and child soldier; people can talk about their issues and raise questions after (the screening),” Rev Maluk said.

BOCEP secretary Susan Sleswick appealed to the community to lend their support where they could by contributing to the potential students’ study materials.

Ms Sleswick, who is also the student support officer at Liddiard Road Primary School, said nearly 10 per cent of students at the school came from refugee families.

Tickets for the BOCEP aid benefit will cost $20 and are available for sale from Select Music in Franklin Street, Traralgon.