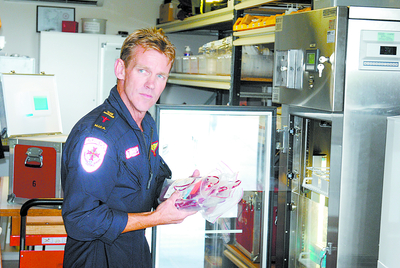 In a life-saving world first, Latrobe Valley’s ambulance helicopter Helimed One will have transfusion-ready blood on board for the region’s serious trauma injuries.

After a decade in the development, bureaucratic and funding pipeline, a specially-designed blood shipper and an airbase blood refrigerator have been installed in the local Helimed unit late last month.

Flight paramedic and team manager Peter Davidson has been behind the push to install the service since 2001, taken up by five helicopters and three fixed-wing aircrafts across the state, and said it has “been a long time coming”.

“People can lose up to seven or eight litres of blood on their way to hospital, which leaves them severely hemodiluted on their arrival to hospital … being able to supply blood product will solve a lot of problems for those patients,” Mr Davidson said.

“In my 20-plus year career, there would’ve been hundreds (of people) that would’ve benefited.”

Within hours of being put on the helicopter, the blood shipper was “vital to the survival” of a 21 year-old woman critically injured when her motorcycle collided with a van in South Gippsland.

The blood shipper, with strict temperature and monitoring controls, will utilise blood delivered from the Royal Melbourne Hospital, however The Express understands discussions are underway in an attempt to source the blood locally.

Mr Davidson said there were previous instances across the state in which blood needed to be delivered to the accident scene before take off, and others in which the helicopter diverted to another hospital en route to Melbourne; both were time costly operations.

Recently-appointed Ambulance Victoria regional manager for Gippsland Michael Stephenson said the service would be well-utilised in the busy Easter period, which was a “boom time in road trauma”.

Mr Stephenson praised the collaborating partners RMH and Helimed auxiliary, who utilised a donation from VicForests to implement the units.