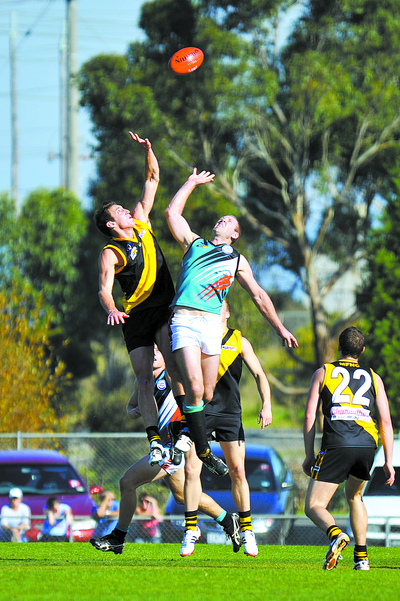 Last year’s premiers Traralgon were smashed by Leongatha by 57 points in the club’s worst loss at home against the Parrots since 1937, when they lost by 54 points.

Leongatha have been tagged as the “premiership favourites” by last year’s flag winning coach Josh Jennings who said his side was “blown out of the water” by the Parrots in the last quarter.

In the last term, Danny Campbell was reported for allegedly striking Jason Tomada to the jaw and he will face the Tribunal this week.

Josh Jennings rolled his ankle half way through the third quarter and is expected to miss this week.

Both defences were on top in the first half with play rebounding between the half backlines.

Jennings was playing well and Cameron Stone was an opportunist for the Parrots up forward.

Both sides could have wrapped it up in the third term and missed a lot of opportunities including set shots and playing on when inside 50.

Dwayne Holt kicked three of his six goals, Matt Willcocks two of his three, Best kicked his second while Colin Sanbrook and David Gourdis kicked one each.

Jesse Bird, after a year in North Gippsland, took the responsibility for the Traralgon defence in the absence of Jaimie Aitken and was consistent under pressure. Jack Doderico, Sam Dunbar and Nic Quenault also played well.

For the Parrots Colin Sanbrook was great as was Tas Clingan, Scott Westaway and Julian Stone.

Morwell had a narrow four point win over Warragul, which Damien Kerr described as a “good win”.

“We deserved to win and had them on the ropes a couple of times but just could not put them away,” he said.

Kerr was pleased with the forward pressure by his players.

Warragul had the chance of a fairy tale ending when Mark Bradley had a set shot 20 metres out on an angle but only a point was the result.

After the kick-in the siren sounded with Morwell scoring a well-deserved win.

Tom Crosby was another to start the game well and was quiet for a couple of quarters but put Morwell back into the game in the final term.

An incident involving a Warragul player allegedly elbowing John Read off the ball may come under video scrutiny if Morwell wants to take the matter further.

Although Moe lost to Sale by 113 points, coach Jason McFarlane was still upbeat about his young and inexperienced side.

McFarlane said Sale is a quality, well-muscled side and Moe was trying to stay loose which let the Magpies in for nine first quarter goals.

The Moe coach gave his side a decent rev-up at quarter time and nearly won the second quarter 4.1 to 4.4, but they were unable to capitalise in the third term.

They were held to a point in the third term but another rev-up by McFarlane saw the Lions go 3.2 to 5.5.

Shane Fyfe was the Magpies’ best and won countless disposals across half back as did Ryan Pendlebury.

Matt Ferguson added six goals to his first round bag of 11 and Kane Airdrie did well to restrict the class forward.

Tom Long played at centre-half forward and had a few runs on the ball, while Chris Robinson did well at half back as did James Blaser in the midfield.

Peter Ainsworth started on Brenton Martin, but after Martin had kicked the first couple of goals was moved to half back and played his usual honest game. Martin’s third goal was his 300th for the Magpies.

Inaccuracy by Maffra kept Drouin in the game on the Drouin ground before running away in the final term to win by 36 points.

Daniel Stubbe was great with six goals and was one of the Eagles best with Ben Coleman, Kelvin Porter, Garry Jones and Sam Tudor.

Wonthaggi had a 31-point win against Bairnsdale with Aaron Ware booting eight and Leigh McDonald three.

The Power led by nine points at the main break and a 6.4 to 1.2 third quarter gave them a commanding break at the final change.

The standouts for the Power were Aaron Ware, Nathan Jones and Chris Wylie while Cam Streeter, James Gibbs and Bayden Ashwood were good for the Redlegs.

The round three match between Warragul and Maffra at Western Park will be played as a regular day game, not as a twilight match as previously scheduled.