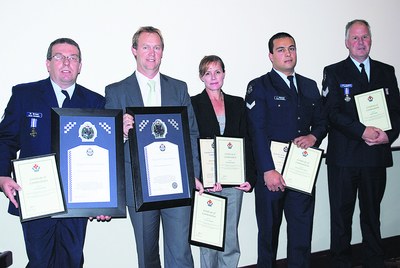 FIVE local Victoria Police members were honoured in an “unusual commendation” from Ambulance Victoria for outstanding efforts in providing assistance at a traumatic scene in Moe last year.

“They attempted to perform first aid, calm witnesses and coordinate a difficult scene despite the trauma,” Supt Walsh said.

“In a volatile and dangerous environment, they displayed exceptional interpersonal skills in calming witnesses, tending a crime scene and delivering death notices.

‘In Melbourne, (members) would not have been expected to finish the job (delivering death notices), but it’s different in the country.

“They were brave and committed.”

At the ceremony, 49 awards for service of 10 years and more were given to Victoria Police members by Regional Commander Assistant Commissioner Wendy Steendam in the presence of members’ families.

Police members from the three PSAs of Bass Coast, Baw Baw and Latrobe were recognised in the ceremony.

Supt Walsh said it was important to recognise the sacrifices made by police members’ families.