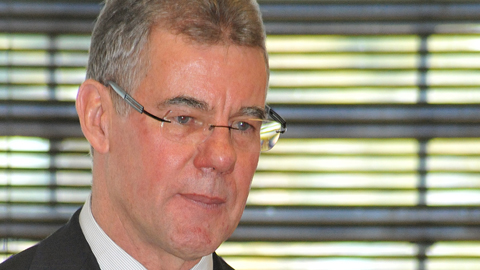 A STATE minister’s failure to address widespread fears over the impact of education cuts in the Latrobe Valley has been likened to the “Kennett era of gagging”.

Referring to indications State Higher Education and Skills Minister Peter Hall, also Teaching Profession Minister, had “gone to ground” over key government education reforms currently rolling out across the region, State Member for Eastern Region Matt Viney said it seemed like “the gag has been placed on the Minister himself” but asked “is it self-imposed or is it coming from the Premier?”

As news spread last week GippsTAFE was beginning its next stage of a large-scale staff redundancy roll-out, in an effort to shoulder its share of $300 million in State Government funding cuts to the TAFE sector, The Express sought comment from Mr Hall, to which his office did not respond.

However a media release was issued the same day from Mr Hall’s office stating the future of the Bendigo TAFE was “assured”.

This came as the The Express learnt the government had made the unprecedented move to sever communication with the state’s leading TAFE representative group, the Victorian TAFE Association.

It is believed government sent a letter to TAFE chief executives statewide on 28 September stating it was bypassing the VTA, and was dealing directly with the TAFE institutes on the impact of budget cuts.

The letter came only two days after the VTA issued a media release stating the TAFE cuts would disadvantage women at least twice as much as males.

VTA executive director David Williams said he was unable to confirm whether “gagging” had occurred within government as he had been forced out of the loop for the last month.

“Frankly, this is a real issue… their strategy is just to proceed ahead with whatever agenda they have and clamp down on meaningful consultation,” Mr Williams said.

“The attitude they have taken is this is the decision they are making and they are going to make it happen… having a more engaged approach is not on their agenda now.”

After Mr Hall failed to comment on fears expressed by Department of Early Education and Childhood Development workers in Moe that more than 60 jobs could be cut, leaving the regional office to operate as little more than a shop front, Mr Viney took the Minister to task in State Parliament, calling for a response to those concerns.

Mr Viney condemned Mr Hall after The Express reported a spokesperson for the Minister called the matter “purely departmental” and he would not comment on the process.

On Friday Mr Viney said he had heard “absolutely nothing” in response to concerns he raised on behalf of local workers and claimed the government’s departmental staff were also “reluctant to say anything (about the matter)”.

Three weeks ago a DEECD spokesperson said the government was “still consulting with employees” about its proposed restructure and the Gippsland structure would be finalised “in coming weeks”.

Though The Express contacted the department for an update on the matter last Wednesday, at the time of publication on Friday it had not received a response.

In Parliament Mr Viney said Mr Hall was the “lead minister for the department of education” and his lack of response over the DEECD issue was “absolutely unbelievable”.

Last week up to 150 teachers and support staff rallied outside Mr Hall’s Traralgon office campaigning, after a 12-month battle for better pay and conditions, amid claims Victoria was losing teachers to other states with higher salaries.

Australian Education Union Victoria president Mary Bluett said the group had gathered to “send a strong message” to Mr Hall “that his constituents are very angry and disappointed they have to continue to take action rather than have negotiated an outcome”.

Again, at the time of publication, efforts by The Express to obtain comment from Mr Hall failed.

The besieged minister has represented Gippsland in the State Parliament since 1988, leading Mr Viney to claim “it is not just that Mr Hall is the minister, he is also the local member and so he ought to be speaking in either or both capacities.”

“The people of Gippsland and the Latrobe Valley have got every right to be very concerned about the cuts to public education that are so obviously happening in their region, and to demand an explanation of these from the minister, and certainly clarification of what the minister is doing and of how these education services are going to continue to be provided to the people of the region,” Mr Viney said.

“This is starting to smell like the Kennett era of gagging…when no-one was allowed to talk about the things that were taking place and affecting them.”

After repeated follow up calls from The Express on the GippsTAFE issue, Mr Hall released a statement on Friday stating its TAFE Reform Panel would deliver a report in the “next few weeks”, detailing transition plan recommendations developed with TAFE.