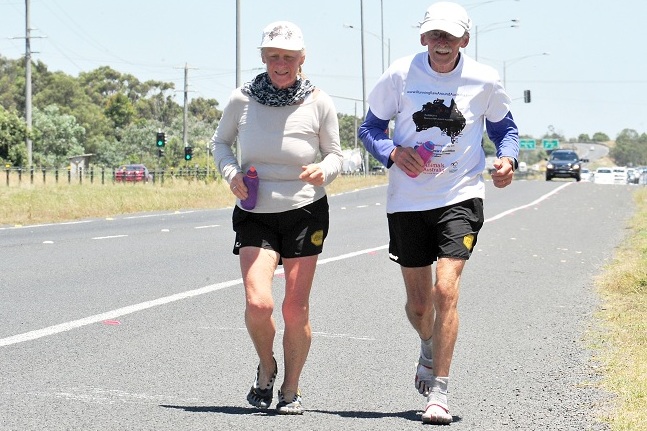 A MARRIED couple in their 60s have committed to run a marathon every day during 2013, fuelled only by raw food.

The couple began their journey in Melbourne and will travel around Australia 42.2 kilometres a day at a time.

Alan Murray and Jannette Murray-Wakelin arrived in Traralgon on Friday.

The couple said they eat kilograms of fruit each day, followed by a large salad for dinner and drink plenty of water to fuel their active adventure and have been raw vegans for more than 10 years.

Ms Murray-Wakelin said the main reason they took on the challenge was to inspire and motivate people to consider the choices they make about what they eat and how they behave.

“We thought if we run a marathon everyday people will notice… it’s a positive message that it’s never too late or too early to start making changes,” Ms Murray-Wakelin said.

The 63 year-old overcame breast cancer six months after being diagnosed in 2001, without chemotherapy or radiotherapy.

She said she attributed a “huge percentage” of her recovery to eating only raw fruits, vegetables and some nuts.

“As soon as I gave my body what it needed to help me, I felt the changes,” she said.

“When I was diagnosed I was told I only had six months to live, but that’s with the treatments they offered me, which would only compromise my body further.”

The couple have spent three years organising and training for their adventure, but have also anticipated there will be challenges.

“We know these first few months will be tricky because of the weather, but we can do it,” Ms Murray-Wakelin said.

“We try to beat the heat by starting at 4am or 5am each day.”

The couple are supported by a team of three women.

Tabitha Hobbins, one of their support team, drives a support car towing a caravan for the couple.

Ms Hobbins, a long-time vegetarian and recent raw food convert, said she had already noticed the positive changes in her body responding to the raw food and was looking forward to helping the couple throughout their journey.

Ms Murray-Wakelin said she and her husband also wanted to raise awareness and money for the charities they support.

Anyone can track the couple’s progress or donate by visiting www.runningrawaroundaustralia.com