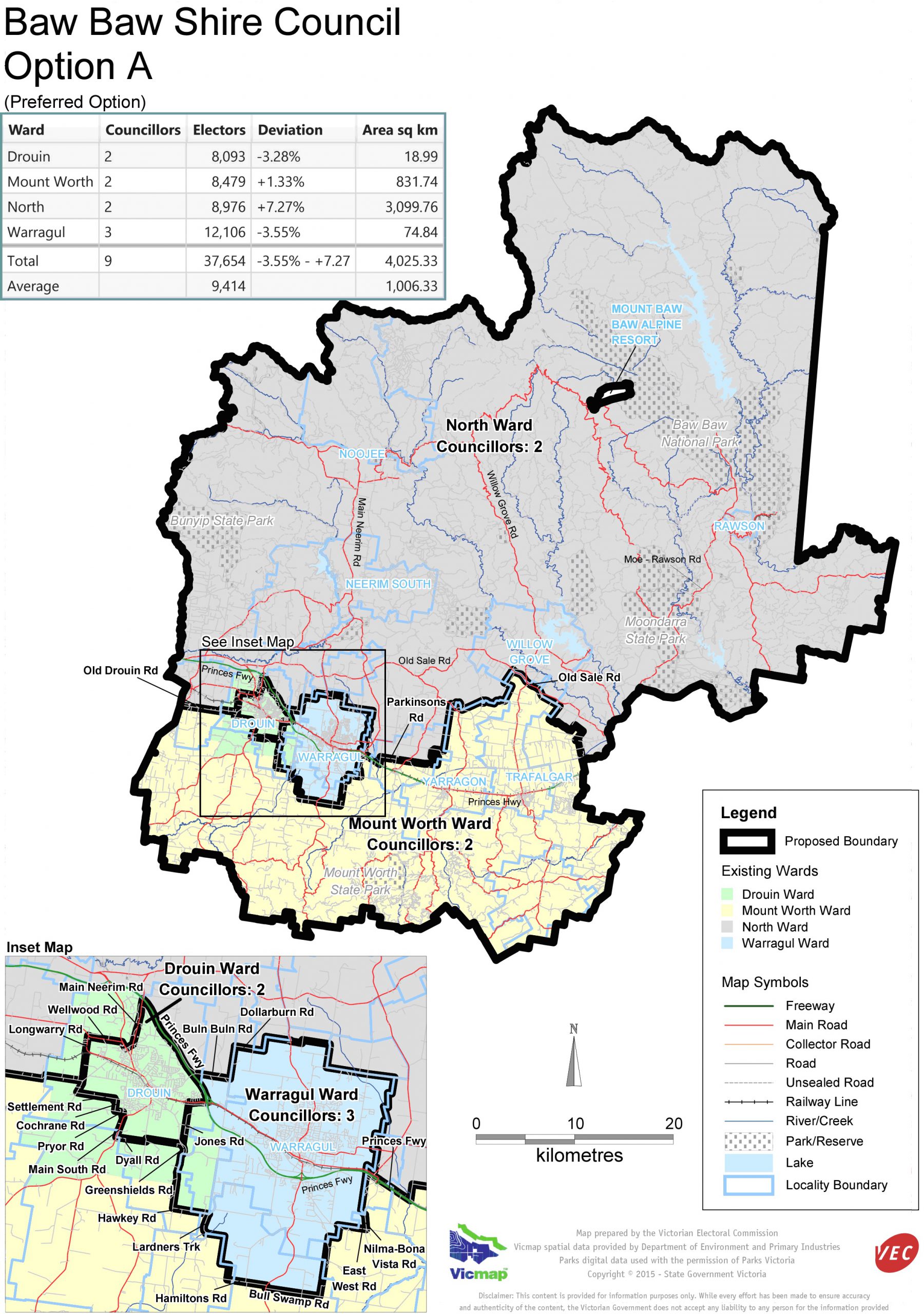 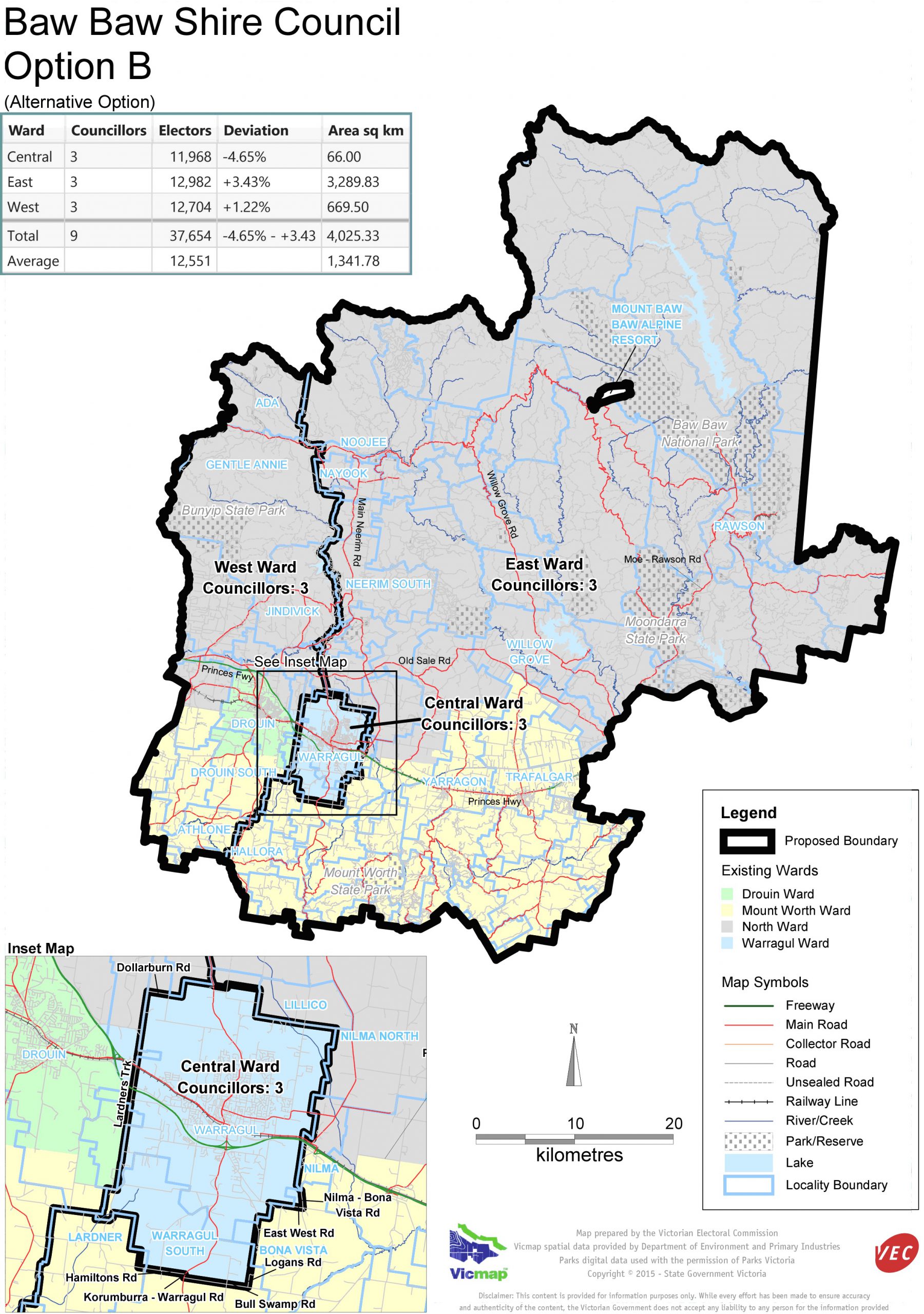 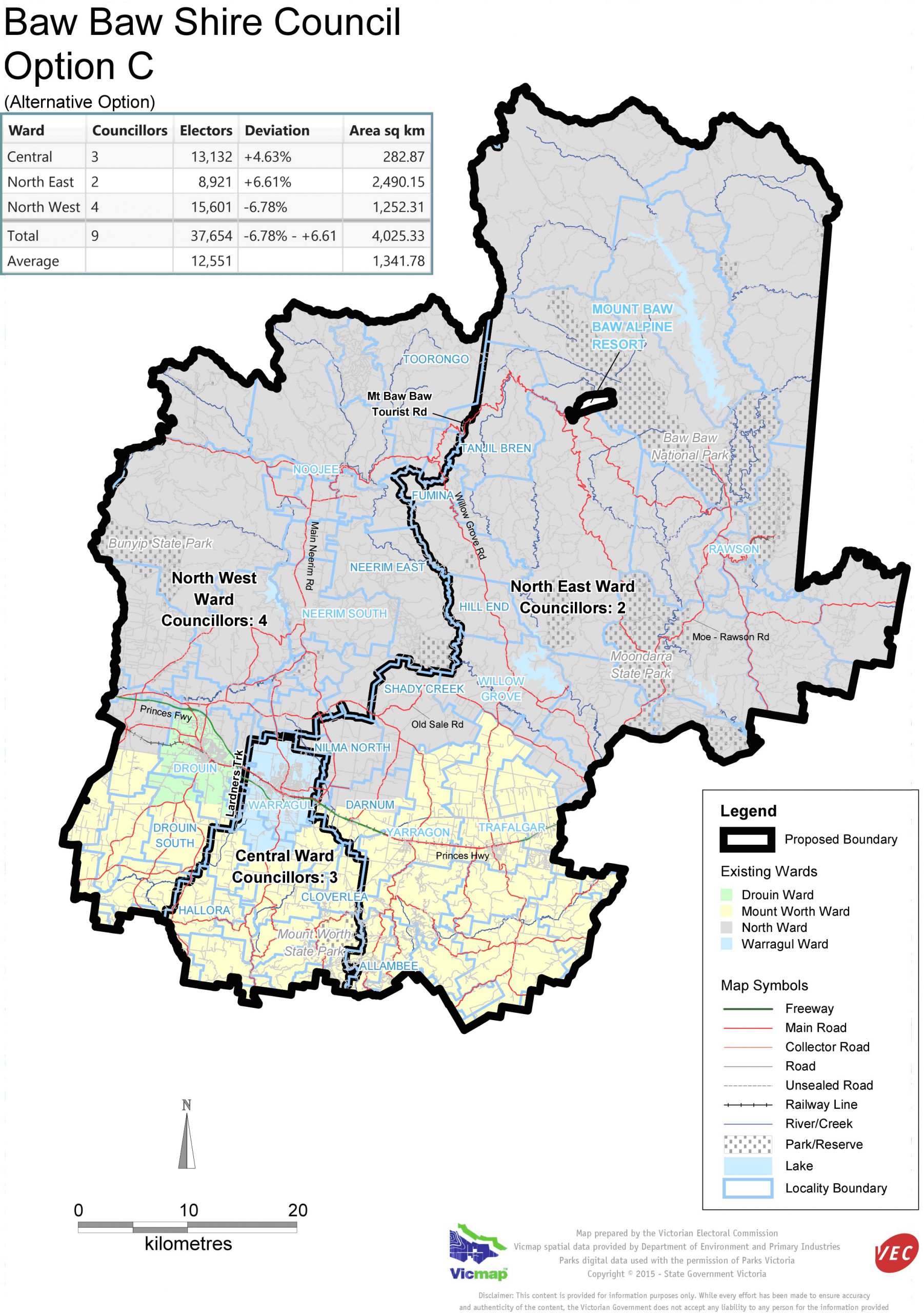 A massive new three-councillor ward taking in the entire eastern part of Baw Baw Shire is one of three proposals council will vote on this month as part of a boundaries review.

The proposed option would incorporate Trafalgar, Yarragon, Thorpdale, Willow Grove, Tanjil South, Erica, Rawson and Walhalla with Noojee and Neerim South in a ward comprising more than three-quarters of the total size of Baw Baw Shire.

But while council in August proposed a reduction down to three wards, the VEC has recommended the current four ward structure be retained.

North Ward councillor David Balfour, whose large area is shared with mayor Debbie Brown and currently takes in 18 communities across the entire north of the municipality, favours a return to reduced ward sizes.

“The workload is so much more for the councillors in the big wards (in terms of travelling),” Cr Balfour said this week.

“I feel that I’m not giving my communities as much time now as I used to be able to when my ward was smaller.”

Option B would consist of the new East Ward (three councillors), a Central Ward comprising of the Warragul urban area represented by three councillors, and the three-councillor West Ward, which would take in Drouin and rural areas to the north and south.

Option C, which is closest to Baw Baw Shire Council’s preferred model, would involve a smaller North East Ward represented by two councillors, a larger North West Ward consisting mainly of rural area north of Drouin and represented by four councillors, and a three-councillor Central Ward of Warragul and rural zones in the south.

The VEC prefers option A, which would slightly reduce Drouin Ward from its current size.

“Geographic communities of interest are broadly contained within the current ward structure, with the mountainous north and the farming districts in the south each represented by a two-councillor ward, and the growing urban wards of Warragul and Drouin each contained within their own ward,” the commission’s preliminary report stated.

However, the VEC admits the current model has some “minor limitations”, namely the east-west orientation of the large North Ward.

It also recognises council’s preference for wards representing the north-south travel corridors, rather than east-west.

“On balance, the VEC considers that the current structure is working well, providing fair and equitable representation for voters across the shire and adequately represents communities of interest,” the report said.

According to the VEC, the majority of submissions to its preliminary review called for a reduction in the number of wards and restructuring the boundaries to take in north-south corridors, placing Trafalgar, Warragul and Drouin and their surrounding rural areas into three separate wards.

Option B would include a large ward covering three quarters of the shire in the east, incorporating Trafalgar and Yarragon, as well as the rural mountain towns in the north and the farming community of Thorpdale in the south.

Warragul and Drouin would be separated into two smaller wards with some rural areas. This model would have three councillors representing each ward, providing an extra councillor to cover the large area in the east.

“The model has the advantage of containing Warragul in one ward – reducing the likelihood of any rural areas being dominated by the town if placed in the same ward,” the report said.

However, the VEC has reservations about this option given the large geographic size of East Ward.

“Despite having an extra councillor, this is still a very large area to represent. It is also quite diverse,” the VEC said in its report.

“While the north-south road corridors are accounted for in this model, it brings together localities that may have little in common, except for their shared interest in the major urban areas (i.e. shopping and services in Trafalgar, Warragul, and into the neighbouring council area).”

Option C would also involve a large ward covering the entire eastern area of the shire including Trafalgar and Yarragon, the mountainous areas in the north and the farming land in the south. This option would be covered by just two councillors.

“The model still results in a large ward in the east, with a potentially large workload for two councillors.”