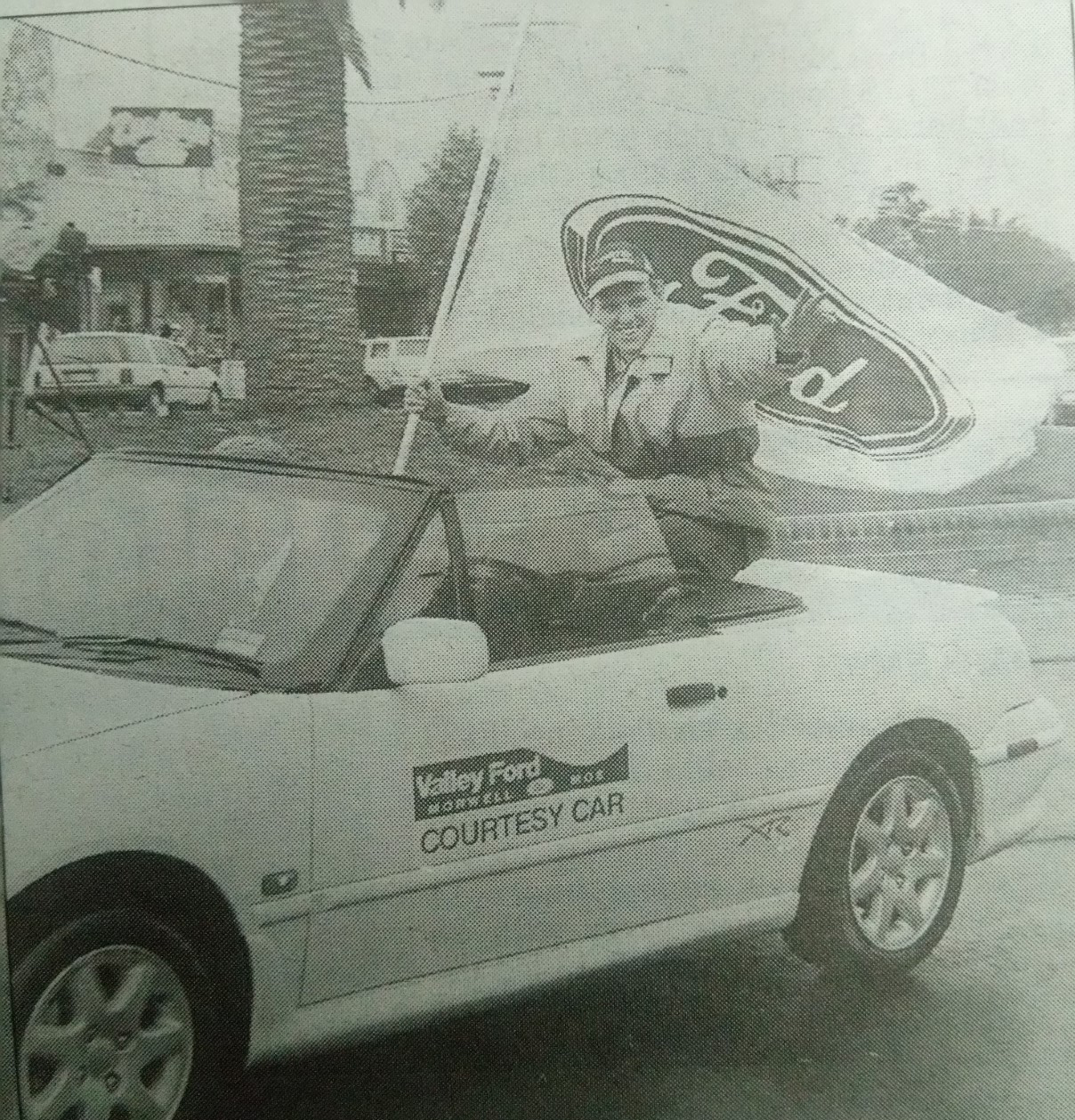 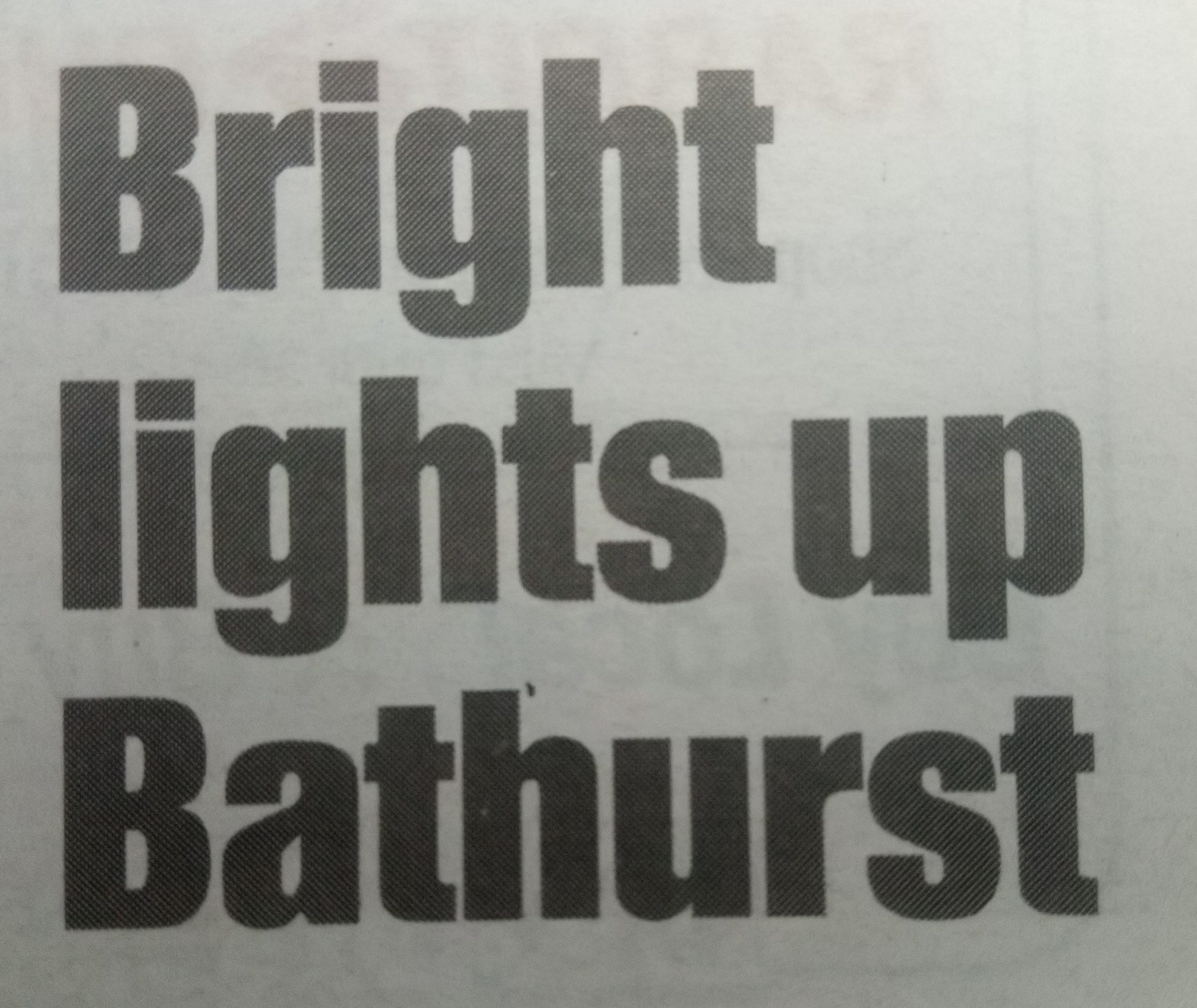 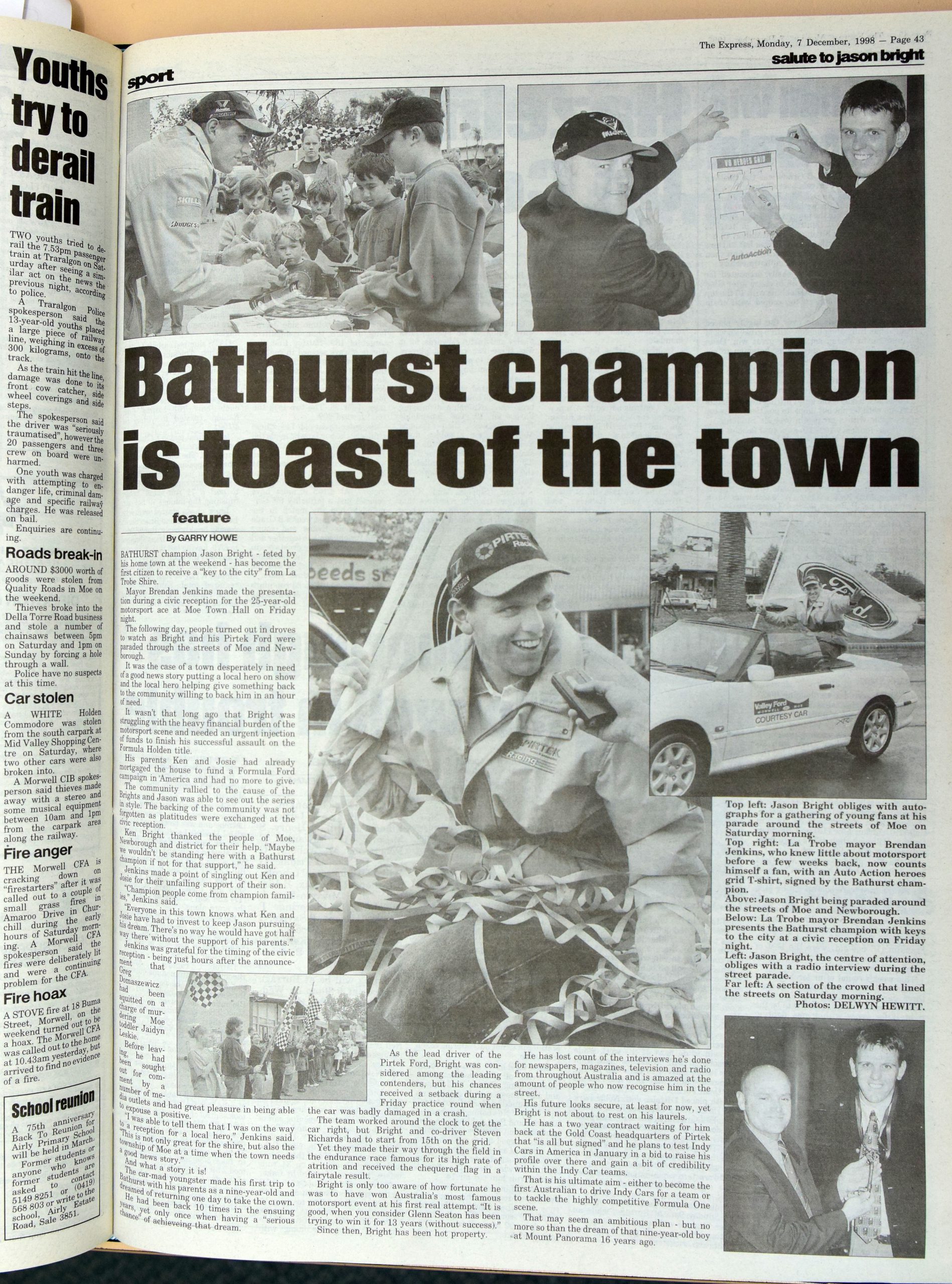 BATHURST is the holy grail of Australian motorsport.

So when the Latrobe Valley’s own Jason Bright conquered the mountain with teammate Steven Richards in 1998, the achievement earned a rightly place in the pantheon of the region’s greatest sporting achievements.

Bright won the Victorian Go Karting Championship in 1991 and by 1993 debuted in the Australian Formula Ford Championship.

He further entrenched himself as one of the country’s brightest motorsport prospects during the next two years.

Bright juggled racing in Australia and the United States in 1996.

He won two races in the US Formula Ford 2000 Championship and tasted success in three races on the Australian Drivers’ Championship.

Bright turned his focus back to Australia in 1997.

He dominated the Australian Drivers’ Championship, winning seven races on the way to lifting the title and made his V8 Supercars debut at Symmons Plains in Tasmania for Garry Rogers Motorsport.

The 24-year-old impressed with his speed and composure, scoring a pair of top 10 finishes on his first weekend.

Later in the year Bright teamed up with 1980 Formula 1 champion Alan Jones to finish third at the Sandown 500.

Bright got his first taste of Bathurst as the third driver with Jones and American Scott Pruett.

His life would change forever when he arrived at Mount Panorama 12 months later.

By this stage Bright had earned a full-time drive with Stone Brothers Racing.

He landed a pole at Hidden Valley in Darwin and garnered a string of top six finishes, highlighted by a third place finish at Calder Park.

But despite those flashes of speed, little was expected from Bright and co-driver Richards when they arrived at Bathurst in November 1998.

Craig Lowndes had won the 1998 Championship ahead of Russell Ingall and Mark Skaife, while luminaries such as Larry Perkins and Dick Johnson boasted extensive Bathurst pedigrees.

Bright had a massive crash in practice on the Friday, but the Stone Brothers team did a sterling job to get the Ford EL Falcon ready to qualify in 15th place.

A strategy to pull into the pits after just 12 laps was one of the key factors in the victory.

Bright had moved from 15th up to ninth when he came in, a move described by commentators as “very, very early”.

But the gamble paid off.

Bright and Richards were running in the top five by lap 32 and climbed into the top three at the 100-lap mark.

As key contenders such as Greg Murphy and Dick Johnson wilted, the Pirtek Falcon climbed to second, albeit more than 30 seconds behind leaders Craig Lowndes and Mark Skaife.

But when trouble struck Skaife due to tyre failure at The Chase on lap 114, Bright and Richards assumed the lead.

Bright pitted on lap 130, with Richards driving the final 31 laps of the 1000km assignment.

Richards, then 26, maintained the advantage to win by 10.33 seconds from Larry Perkins and Russell Ingall.

For Bright, it was the moment of a lifetime.

“We just had the strategy and the car to win the race, and it was up to me and Steve to do the job,” he said.

“It is no secret that I made a mistake earlier in the week and the team did a fantastic job to get it back together and in a state where it could win the race.

“We were so far back that it was decided that we should make the early stop and as it worked out, the pace cars fell our way.

“We have had a tough year, but this was just a dream come true.”

Bright’s triumph received the front page treatment from The Express on Monday, November 16, 1998.

Sports reporter Jason Shields tapped into the significance of the win in his report.

The reward was tremendous for the Bright family, especially Jason’s parents Ken and Josie, who have had to battle through financial hardship to help continue their son’s driving career.

Three years ago, the couple sold their house in Newborough and late last year had to call on the Latrobe Valley for financial support to get Jason to the track for the final round of the Formula Holden Championship.

“It was a really hard thing for us to do,” Ken recalled.

“But we got the support we needed and Jason got to the track and wrapped up the championship.

“Now he is the golden boy of Australian racing.”

The Bright family and the Pirtek team spent last night celebrating together until the early hours.

“Last night, Jason and I just looked at each other and shook our heads. We just can’t believe that it has happened,” Ken said.

“I’ve had to keep recharging the mobile phone batteries because the congratulation calls have been running hot.

“We’re certainly appreciative of the support we’ve had.

“Hopefully Jason’s win has captured the imagination of the Latrobe Valley.”

It did just that.

Bright was given a welcome home parade in December with more than 2000 people lining the streets of Moe and Newborough.

Bathurst champion Jason Bright – feted by his home town at the weekend – has become the first citizen to receive a ‘key to the city’ from Latrobe Shire.

Mayor Brendan Jenkins made the presentation during a civic reception for the 25-year-old motorsport ace at Moe Town Hall on Friday night.

The following day, people turned out in droves to watch as Bright and his Pirtek Ford were paraded through the streets of Moe and Newborough.

It was the case of a town desperately in need of a good news story putting a local hero on show and the local hero helping give something back to the community willing to back him in an hour of need.

It wasn’t that long ago that Bright was struggling with the heavy financial burden of the motorsport scene and needed an urgent injection of funds to finish his successful assault on the Formula Holden title.

His parents Ken and Josie had already mortgaged the house to fund a Formula Ford campaign in America and had no more to give.

The community rallied to the cause of the Brights and Jason was able to see out the series in style.

The backing of the community was not forgotten as the platitudes were exchanged at the civic reception.

“”Maybe we wouldn’t be standing here with a Bathurst champion if not for that support,” Ken said.

Bright is only too aware of how fortunate he was to have won Australia’s most famous motorsport event at his first real attempt.

“It is good when you consider Glenn Seton has been trying to win it for 13 years (without success).”

Bright would go on to enjoy a successful career in Australia and internationally.

He raced in the Indy Lights and Champ Car series in America, as well as competed at Le Mans.

Bright won 20 races and had 17 pole positions in a 573-race career in the Supercars, finishing third in the championship standings in 2001 and 2004.

He retired in 2017 and these days runs Taskforce, a trades and services franchise he set up in 2013.