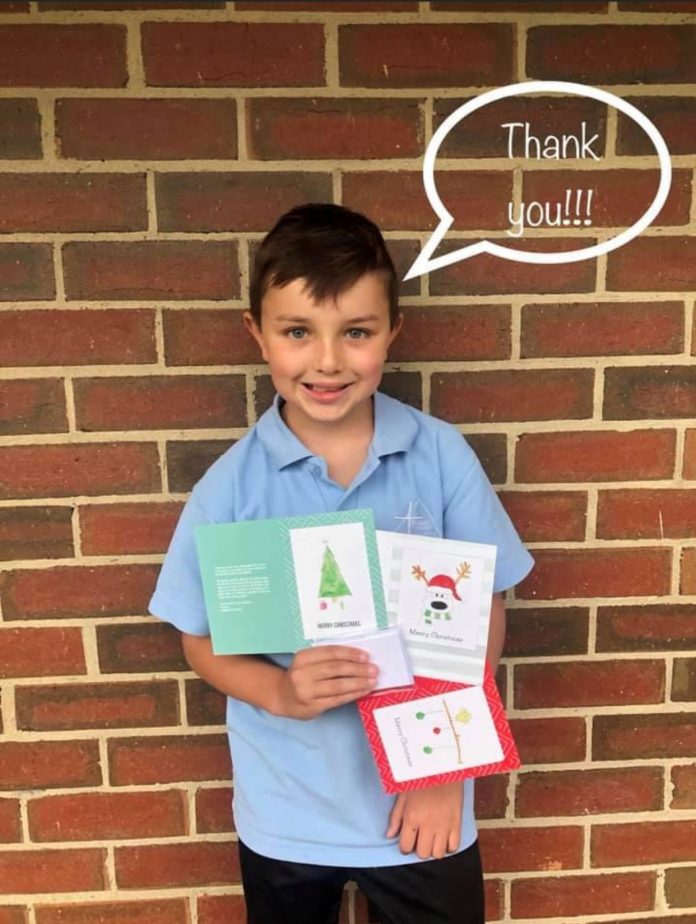 Nine-year-old Harvey Di Dio may small big but his heart is definitely huge.

Harvey, who is in Year 4 at St Michael’s Primary School in Traralgon, is selling handmade Christmas cards to raise money for the Ronald McDonald House for a second year in a row.

He came up with the idea after RMH provided his family free accommodation on two separate occasions when his younger siblings had their medical procedures done at the Monash Children’s Hospital in Clayton and at the Royal Children’s Hospital.

“I wanted to donate money to RMH because my sister (Isla, 4) had to stay in hospital for six weeks after bowel surgery when she was born and we stayed there,” Harvey said.

“I ate lots of pancakes so wanted to pay them back for all the maple syrup I ate.”

In late 2019, Harvey’s younger brother Chad, 7, had a tumour removed at RCH and the family again accessed the house.

“I wanted to make a lemonade stand to raise money but I wasn’t sure I would get any customers so mum helped me think of other ways to raise money. I like drawing so thought I would make some cards to sell to my family,” he said.

Last year Harvey sold Christmas cards to family members aiming to raise $50 for the House, but ended up with a total of $5581 after his mother set-up a Facebook page to promote his project, called Cards by Harv.

He received about 300 orders and made a total of 3000 Christmas cards that were printed by local printing service Image Direct.

The Traralgon-based company donated 500 cards to the project and the total sales all went to RMH.

Harvey said he had fond memories of staying at the House and particularly liked riding bikes outside the facility and getting food from the pancake machine.

“When we were all back home I asked mum if we could go back there for a holiday another time I liked it so much,” he said.

This year Harvey is hoping to raise $8000 to sponsor a room at RMH for a year by selling his Christmas cards.

“I am doing it again this year because I know that it can make a family and kids’ lives happier,” he said.

“Our younger son had been diagnosed with a tumour when Harvey came up with the idea. Cards by Harv was a lovely distraction at the time (and) it gave our family something else to focus our energy on,” she said.

Mrs Di Dio said RMH provided her family a home away from home where everything was provided for them, including some meals, which were made by volunteers.

“Knowing we can give back and support other families who are going through the challenge of having an unwell child fills our hearts. Our journey would not have been as easy if we didn’t have RMH so we want to make sure it’s there for other families who need it,” she said.

To purchase a card from Cards by Harv, visit https://cardsbyharv.square.site/