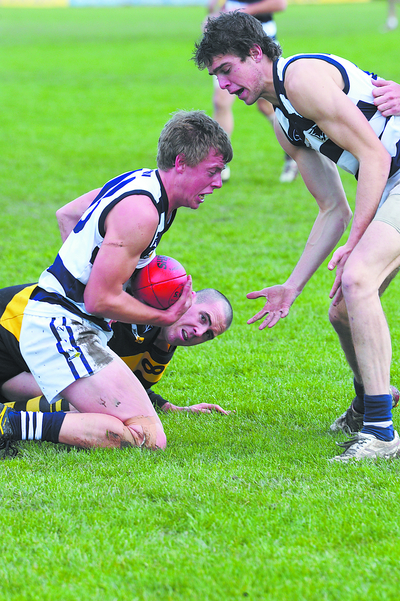 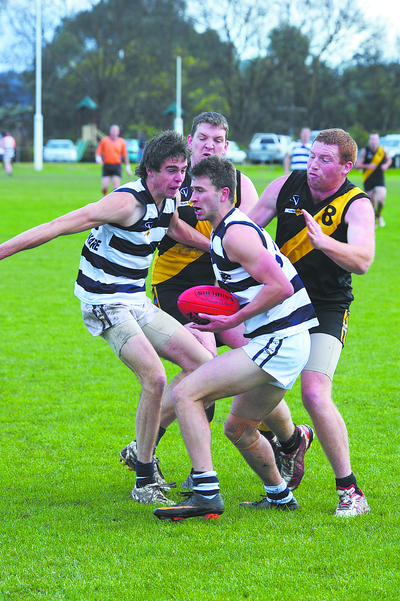 THERE were feelings of relief all round for Gormandale on Saturday as the Tigers posted their first win this season, defeating Woodside by 57 points.

A number of ex-Gormandale players pulled on the boots for the club, including last season’s captain and current Wonthaggi Power player Daniel Domaille, and Andrew Winter who proved invaluable in Gormandale’s victory.

The high-fives started early for the Tigers, as Winter booted three majors in the opening term; however, it was the Wildcats that led at the first change.

There was no reprieve in the second term as the sides went goal for goal, the Tigers rallying to reverse an eight-point deficit into an eight-point lead at the main change 8.6 (54) to 7.4 (46).

A seven-goal to three third term extended Gormandale’s lead at the final break, with the Tigers slamming home a further five goals on their way to a 20.9 (129) to 11.6 (72) victory.

Defender Steve Hore was the general of the backline, while ruckman Toby Callanan provided the running midfield led by Domaille with the first touch of the ball.

Richards returned from a prolonged break on the sidelines to boot two.

The Wildcats were well served by Ryan Foat, who finished the match with four while Clancy McAlpine was also a valuable contributor stepping up in front of goal with three.

In the battle of the heavyweights, Heyfield triumphed over Sale City by 22 points.

Two points separated the sides in the opening 20 minutes of play, before a solid seven-goal to four second quarter from Heyfield established a handy 22-point margin at half time.

The Dogs dug deep in the premiership term to bring the margin to under a kick, the impetus for the challenge coming from Jake Schuback with a stellar display in front of goals.

But it was the home side that held strong, keeping the reigning premiers goalless in the final stages of the game to record its third straight victory, 15.13 (103) to12.9 (81).

Heyfield’s Matt Millar and Jesse Bedggood combined forcefully in front of goals, booting nine between them.

Nic Dinsdale was named best on ground, while Jesse Jackway provided a focal point around the ground and Jordon McDonald worked hard for the Kangaroos.

Neville Moyle led from the front for the Dogs, while eight goals to Schuback increased his season goal kicking tally to 38.

The opening half was a close contest, before a four-goal to one third term from the Cougars defined the match.

Trailing by two points at quarter time, the Magpies drew level at half time with the sides locked at 6.4 (40) apiece.

Ben Nicholson was a standout for the Magpies, with coach Ryan Potter returning to the line-up.

Heavy conditions made the going tough for ladder leaders Rosedale, as it held off the fast finishing Saints.

Falling shy by eight points, Cowwarr threw down the gauntlet in the final term outscoring the Blues 3.2 (20) to 1.3 (9).

Led by Luke and Lee Cooper, the Saints rallied in an impressive display of football in wet slippery conditions.

Without its number one ruckman Jon Cantwell and classy midfielder Justin Emery, Rosedale struggled early as Cowwarr’s Chris Stasinowsky led from the front as his side dominated passages of play, but failed to make an impact on the scoreboard.

The trying conditions did not get any easier in the second term, but Rosedale made the most of its opportunities in front of goal.

The Blues continued where they left off in the third term adding a further two majors to the score, with Cowwarr managing just one behind.

But a disappointing third term did not dampen the Saints spirit, digging deep to provide the premiership favourites with a late scare.

Booting a match-high six majors, Graham led from the front as his side dominated the contest early, the match all but over by half time.

The Bombers used their pace to their advantage, and could have finished with a bigger margin had they kicked straighter.

Luke Middleton had plenty of the ball dominating the ruck contests, while Chris Graham struck a striking figure in the middle of the ground and Damien Hector impressed with his two goals.

For the home side Owen Sim and Ryan Peel worked hard all day with Matt Simmons and Michael McKay booting two apiece.