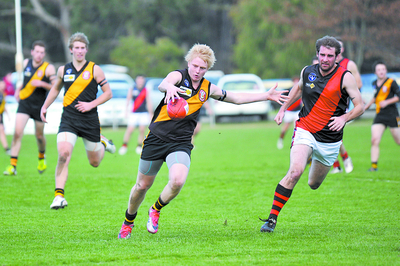 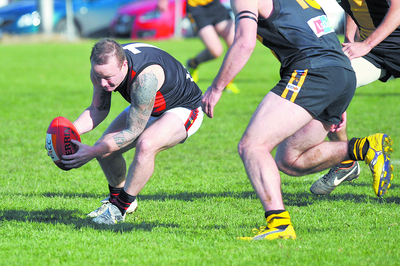 YALLOURN Yallourn North takes on Newborough this weekend in Mid Gippsland football, following a heavy loss to Mirboo North that saw it slip to seventh on the ladder.

The Bombers will want a win to keep touch with the top five, but it will be hard going against in-form Newborough.

Bombers coach Tony Price said his side did not have the quality to match Mirboo North’s best last week, and would look carefully at the match-ups this week.

“We’re looking forward to the challenge of playing them,” Price said.

“We think we can be competitive.”

Price said his side has more to give and believed it could play finals football this year.

“We think we can turn it around and believe we can make finals,” Price said.

Hill End will host Boolarra this weekend, after the Hillmen suffered an unexpected 90-point thumping by Morwell East last week.

In a similar vein, Boolarra handed out a thrashing of its own last week to Thorpdale.

Last week the Hawks’ strong defence stopped Hill End’s run with the ball which cost them.

The question will be if Boolarra can maintain its winning form, or whether Hill End can get its back.

Trafalgar coach Chris Kyriacou said his side would “regroup and work on some stoppages” after its narrow loss to Newborough last week.

“We’ve got to rebound and hopefully knock off Morwell East next week,” Kyriacou said.

“They’re going to be no push over.”

Centre-half forward Blake Slater will be back for Trafalgar after five weeks out with injury.

Hawks coach Paul Henry said a few more players should return to strengthen its side.

Henry was pleased with his team’s performance last week, and said the win was part of his plan in preparation for the Trafalgar game.

“It’s going to be a really good challenge and I can’t wait for it, to be honest,” Henry said.

Thorpdale may expect another charge of goals kicked against them this week, with Yinnar in fine form after a 150-point belting of Yarragon last week.

Yinnar is now just one game off the top five and could step up if Morwell East loses and the Magpies boost their percentage with a large margin win this weekend.

The Blues are used to big losses, but do not make it easy for their opposition.

Their intensity and pressure is good, but the skills drop off as the side fatigues.

Magpies coach Sam McCulloch said he hoped to have a great start like last round and “get them on the back foot early”.

Mirboo North dealt out a trashing while Yarragon suffered one last week, and it could be a repeat for both sides this weekend.

The in-form Mirboo North is now in third on the ladder, and keen to hold on to the position.

However, Tigers coach Troy Hamilton is not underestimating the Panthers.

“Yarragon is always a strong opponent back home,” Hamilton said.

“We’ll still go into the game expecting a tough game.”