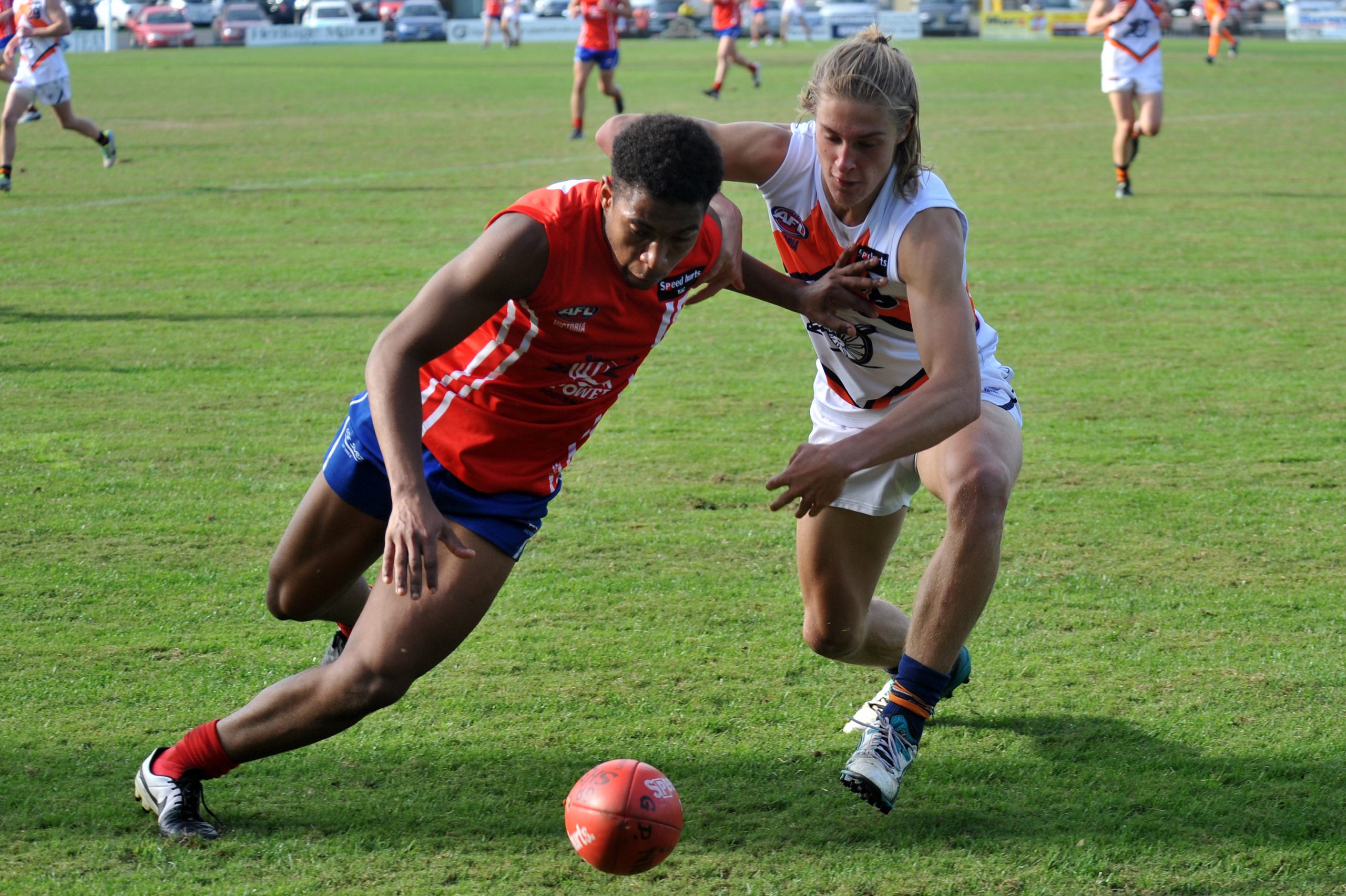 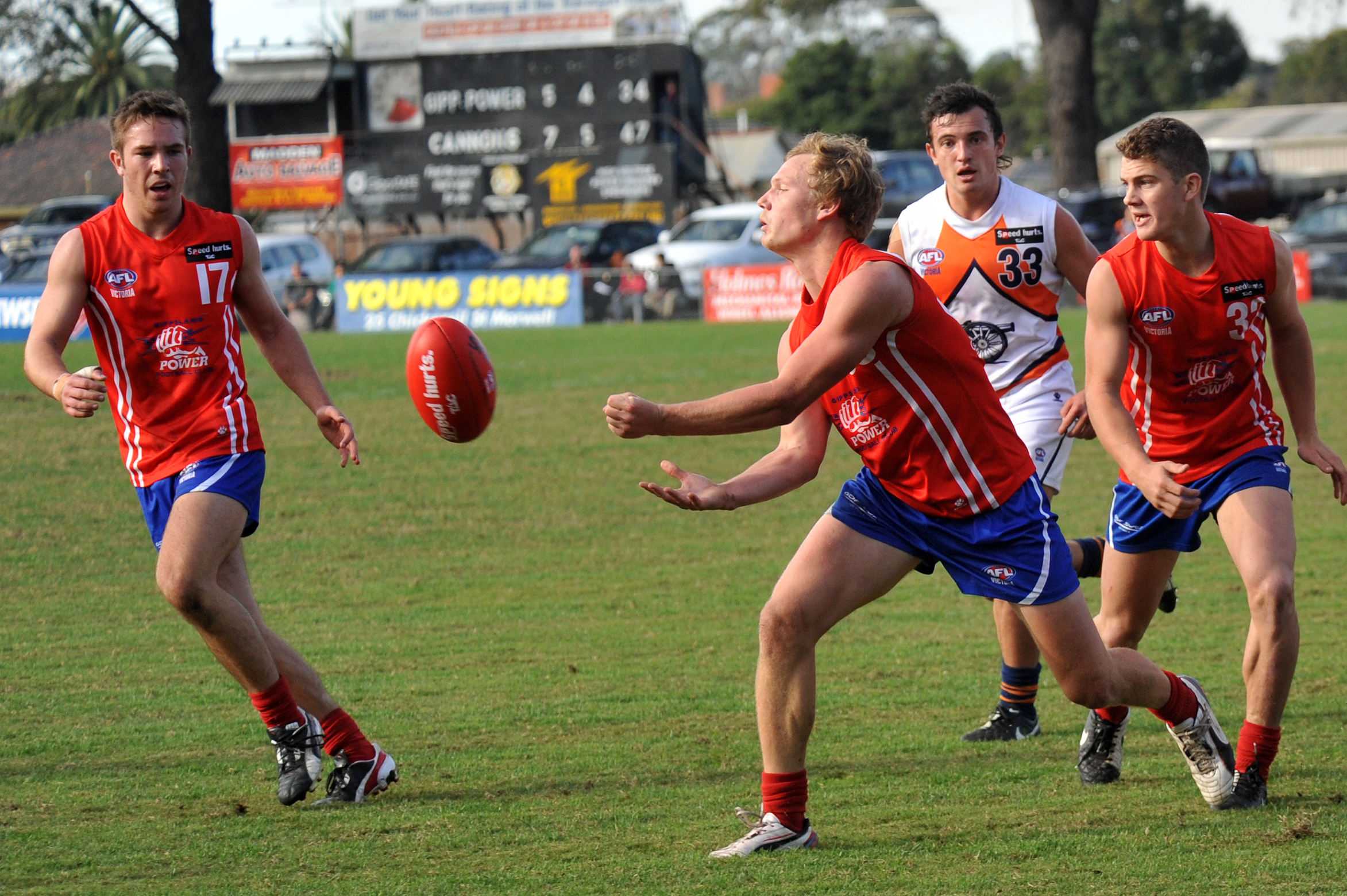 LOY Yang B Gippsland Power confronted the TAC Cup’s top side, the Calder Cannons, and played some of its best football for the 2014 season before falling short by 18 points at Morwell on Saturday.

Both teams went into the vital encounter without key players due to state football commitments and the Power’s team was further affected by long-term injuries.

Given this relatively gloomy prognosis, coach Leigh Brown addressed some team based problems and renewed focus for this assignment.

Things looked grim early when some poor defensive play gifted the Cannons the first goal of the match.

However, a long and direct attacking foray by Ash Di Ciero allowed Mackenzie Bristow to mark well and kick a vital goal for the Power.

The Power was employing its stock brand of hard-nosed football and once again some positive ball use by Tate Marsh saw Di Ciero kick the second for his team. More team-oriented play involving Aloysio Ferriera, Marsh and Di Ciero resulted in Declan Keilty goaling as the Power dominated general play and, for the first time in weeks, converted forward opportunities regularly.

An untimely free kick and 50-metre penalty allowed the Cannons to seize the initiative and take a narrow lead after a goal from the ensuing centre bounce.

Some lapses in concentration robbed the Power of a chance to build a lead by the end of the term, but signs were promising in the face of stern opposition.

Early in the second quarter the Cannons clinically exploited some soft defensive play on their goal line and quickly had two goals on the board.

Nash Holmes used one of his many possessions well to set up Di Ciero for a critical reply but the Cannons hit back in a hurry.

The Power kept applying pressure all over the ground and Holmes earned a free kick, which he converted with a superb finish from the 50 metre line.

Forward pressure resulted in another major to Ben Dessent, putting Power right back in the contest, however two Calder goals stymied momentum.

It took a quick kick by Mitch Stanlake to allow Michael Jacobsen to take a contested mark and reduce the lead to 13 points by the long break.

Every time the Cannons looked likely to take the match by the throat, the Power responded brilliantly and had a big say in contested issues.

In the opening minutes of the all-important third term the Power made the Cannons struggle to convert their scoring opportunities.

A goal to the visitor after five minutes of dogged play did not open the floodgates, as the Power maintained focus and kept the Cannons goalless for the rest of the quarter, despite more than 20 forward 50 entries.

Facing a 25 point deficit at the final change, the inexperienced Power line up conceded two untimely goals to begin the fourth term.

Some intense forward pressure by the Power, led by Tom Papley, saw him earn a free kick, which he converted to provide a glimmer of hope.

Papley then snapped a second from a tight situation.

Team leader Alex Carr was stunning all day with his dominance in tight contests and kicked a blinder from 60 metres out to reduce the Cannons’ lead to two goals with about 10 minutes to go.

Despite their best efforts, the Power boys could not manage another major and with a few minutes to go the Cannons sealed their victory with the last goal of the game.

The Power now goes into another competition bye over the long weekend.

Once again the side will be well represented with players in the national championships.

Dandenong Stingrays will be the Power’s next opponent in the TAC Cup.