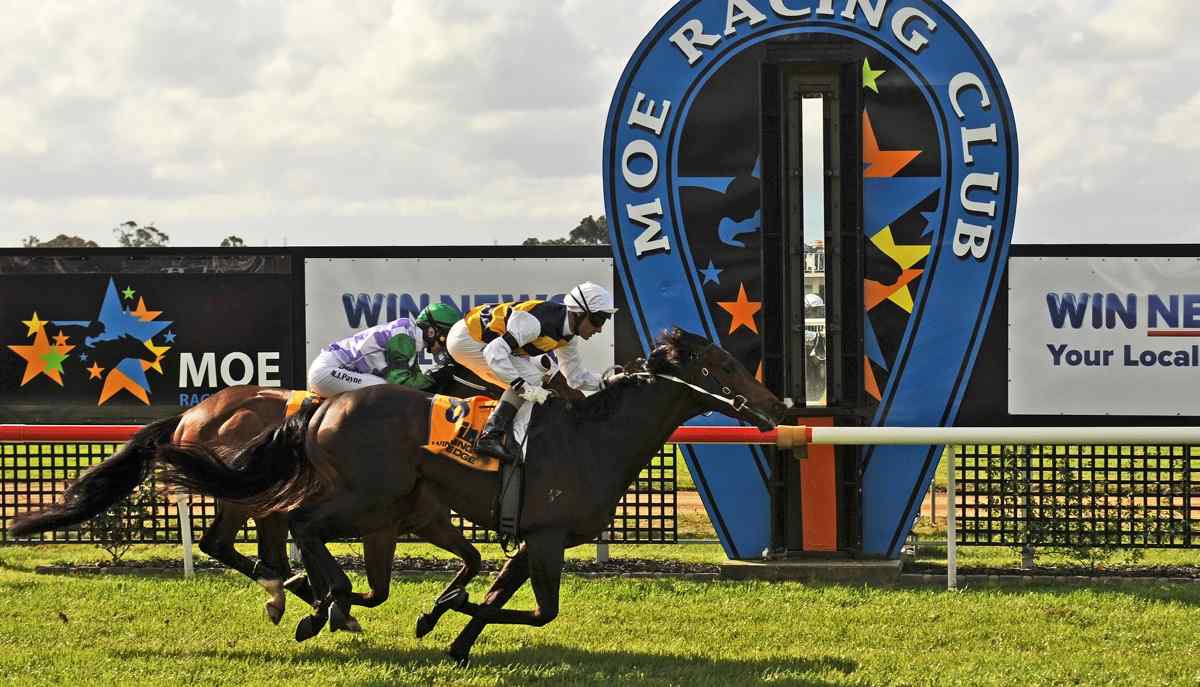 MICK Price import Count of Limonade made short work of the Moe Cup at long odds last Thursday to take out the $135,000 feature race.

Champion jockey Glen Boss pushed the $19 outsider hard from barrier 14 and kept pace with the early lead before cantering home from central position through the final furlong.

Darren Weir trained Prince of Penzance ($4.80) made a fist of the pursuit but Price’s five-year-old Irish galloper held on by a neck.

Short price $2.80 favourite Kenjorwood, of the Peter Moody stable, ran third, while local hope Hvasstan ($6) fell off the pace after a strong start to finish 11th.

Price, a regular presence in Gippsland racing circles, has had two previous Moe Cup winners with Chattanooga and Captious in 2003 and 2007 respectively.

The OTI group’s Count of Limonade had not placed in four starts, but owner Simon O’Donnell said he showed his true colours on the softer surface.

“The run was fantastic, of all the country cups probably this and Cranbourne are the real pressure cups and you’ve got to have a horse that handles it on the day, and we’re absolutely thrilled ours did,” O’Donnell said.

“Probably the horse has been disappointing a little bit since he’s arrived from Ireland, and this prep on a couple of hard tracks he hasn’t performed overly well.

“Today’s the first time he’s had a bit of give in the ground with any of his racing in the southern hemisphere and I think we saw what he’s capable of.”

O’Donnell said taking out the Moe Cup, the first since 2011, was a huge boon for the OTI group.

“Cups are what we’re about, we’ve won our fair share and we hope we continue to. Cups in country towns and regional areas are special days and we’ve been lucky enough to be competitive in a few, so it’s always nice,” he said.

Peter Gelagotis-trained Hvasstan was well suited to the slow six surface, and looked likely after bursting from barrier 10 to take a share of the early lead and the inside track.

However the Fastnet Rock colt failed to fire down the home stretch, leaving the Gelagotis brothers and jockey Hugh Bowman alike confused and disappointed.

“It appears to be the inside is not probably the place to be… maybe we got the tactics wrong,” Manny Gelagotis said post race.

“It would have been nice to run him a bit more quieter I suppose but on the day he’s a class sort of horse and we expected a lot more from him.

“He was fine, (Bowman) felt there wasn’t a lot of horse there, had a chance to get through the gap but wasn’t going well enough to take it so a bit disappointing, below expectation for sure.”

The pain continued for the Gelagotis clan in race seven as Esprit Rossa ($9) pulled up and ran last, again with Bowman in the saddle.

It was not all bad news for the Moe stable; Mossale ($3.80) and Canadian Major ($6) scored a Gelagotis quinella in the fourth, and Illustrious Lad ran second in the eighth and final race under Bowman at $4.20.

Local trainer Elizabeth Hunt saluted with favourite Recalculate in the 1000 metre second race, while Paul and Tracey Templeton picked up a pair of third placings with Simply Simon ($21) in the fourth and Rockedly ($13) in the last.