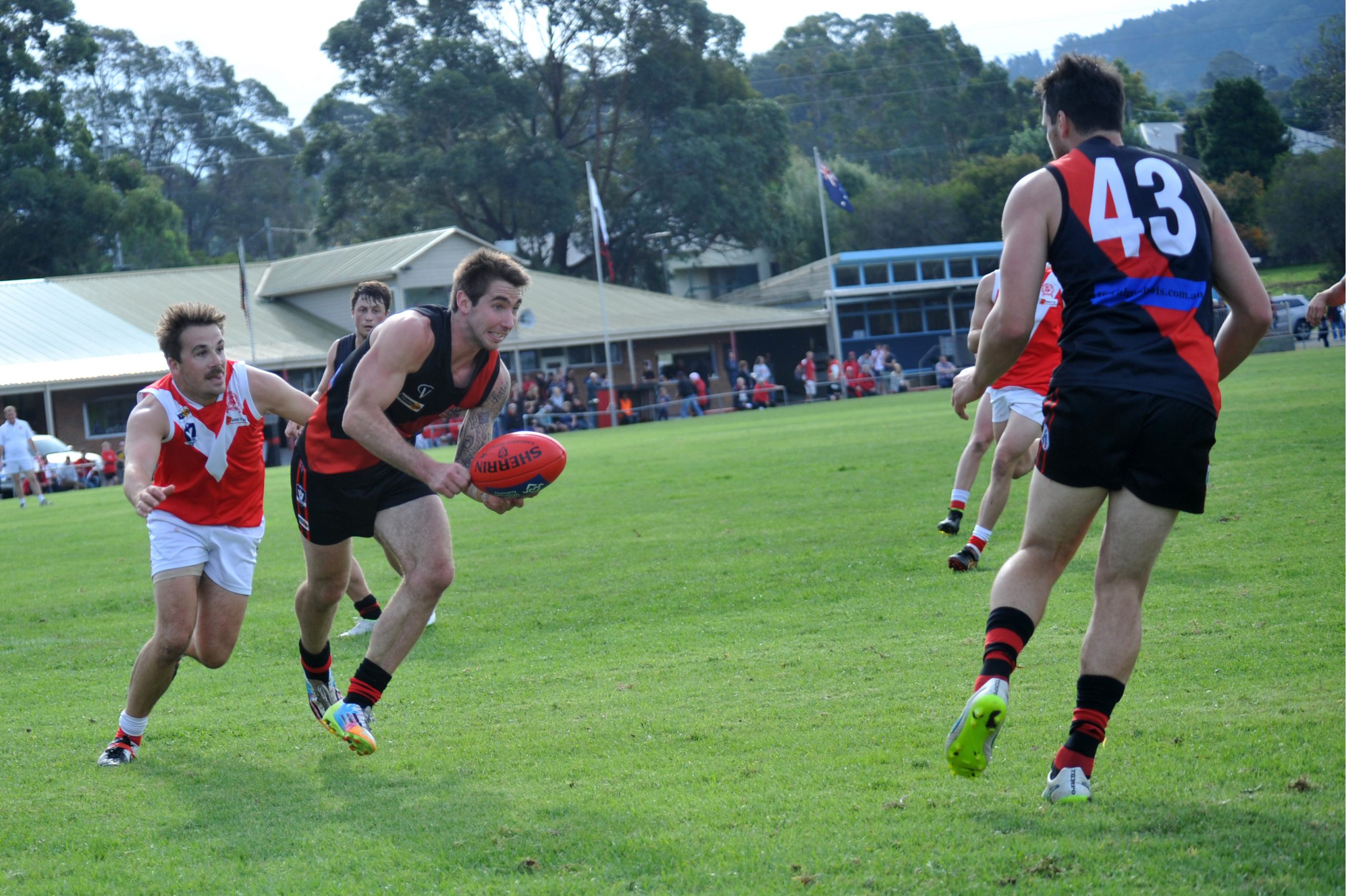 SCOREBOARD attendants were kept busy with a number of high scoring contests featuring in a mixed round of North Gippsland football.

In a see sawing contest, which saw the lead change times on more than several occasions, the Bombers and Demons were locked at 7.7 (49) apiece at the long change.

Both sides’ engine rooms toiled hard throughout the contest.

The sides exchanged blow-for-blow on the scoreboard in the premiership term with the Bombers outscoring the visitor five goals to four to take a slender five point break into the final term.

With the contest in the balance TTU started the final term strongly.

Stephen Hawkins was the go to man in front of goal for the Bombers, adding to his match tally of six as the home side started to break clear of Yarram.

MAKING one of the toughest road trips in the league on the back of an 18-goal defeat in round one, Gormandale proved to be a formidable opponent against Heyfield, which was forced to work hard for the four points.

Leading by a mere four points at the first change, the Tigers kept with their more fancied opponents in a tight affair, which coach Luke Henderson was reflective about.

“A much improved defensive game gave us a real chance. That needs to be the minimum standards of our group for us to compete each week,” Henderson said.

“We played with real purpose and intent, and are looking forward to the next challenge of Yarram.”

Despite their best efforts the Kangaroos, through forward Daniel Stubbe, held the upper hand, chipping away at the score board to register their second win by a comfortable 27 points.

Daniel Stubbe was the pick of the goal scorers finishing with a game high seven, Sean Humphries was one of the chief architects across half-back, while Josh Stubbe continued his impressive start to the season in the engine room.

It was a tough day for the home side which proved little match for a rebounding team that boasted goal scorers around the ground.

Brad Caldwell kicked six, while Brad Scott (six) and Jeremy Reid (five) capitalised on their opportunities in front of goal in a double century tally that involved 15 individual scorers.

The visitors started the contest slowly, opening their account with five majors, before the Blues stamped their supremacy on the competition.

Rosedale slammed home seven goals to two to all but end the contest by half-time.

Blues midfielder Dale Fleming amassed possessions in a stellar individual performance to be named best on field, Adam Diamond made the most of his opportunities to shake the tag and run amok, Brad Scott was commanding in the forward line while Woodside coach Daniel Risol was the side’s sole scorer with two majors and led from the front.

Much of the pre-season talk centred on the threat that those from the kennel would pose and they have certainly put the competition on notice over the past fortnight.

Many spectators described the side’s round two performance as ‘shades of 2011’ when it achieved its last premiership.

Booting eight goals in the opening term and a further six ahead of half-time, the home side established a match-winning margin of 80 points at the long change.

Keeping the foot on the pedal, the Dogs scored nine majors to one in the final term to run home 163 point victors.

There were plenty of promising signs for the Dogs; Jake Schuback was at his dominant best with a haul of six majors, new recruit David Piasente found plenty of the ball, and Mitch Bennett and Rowan Bell were both lively in a goal kicking contingent of 10.

The contest was evenly placed following a tight physical opening 25 minutes of play, with the Saints holding sway at the first change.

The momentum swung in favour of the Cougars in the second term as they dominated the ruck contest courtesy of Andrew Brown.

The fleet-footed running brigade ensured an eight goal to four term, which proved telling at the final siren.

The Saints regained their composure following half-time, chipping away at the scoreboard.

Brad McBride was the pinch hitter in front of goals with five, but the Cougars’ electric second term guaranteed the points.

Tim Darby was the pick of the goal scorers with six, James Allan was a solid contributor while Chris Williams and Nic Campbell demonstrated flair around the contests.