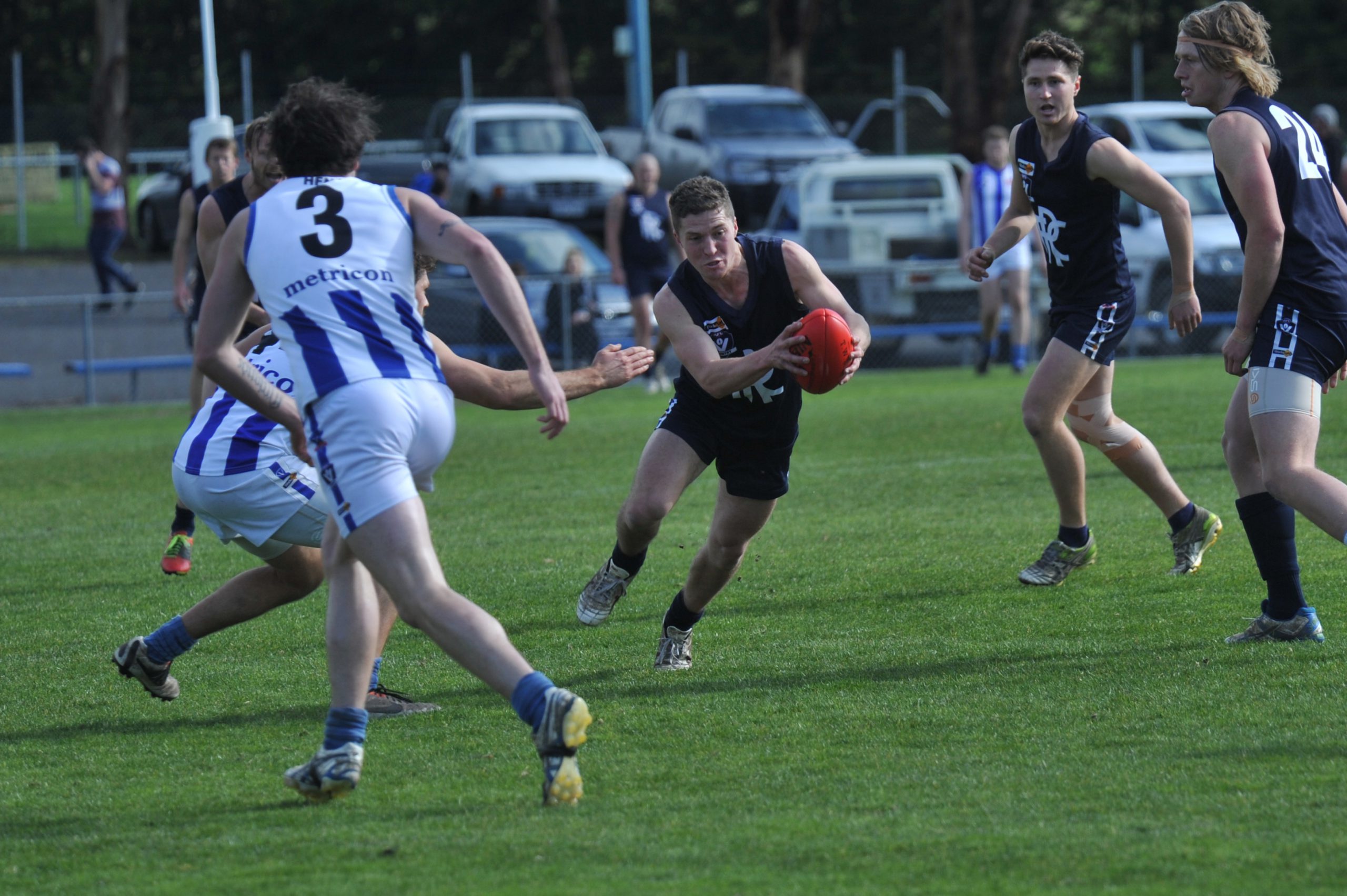 Exploding out of the blocks after half-time, the Blues kicked nine goals straight to build a match-winning lead, steamrolling premiership hopeful Heyfield in a one-sided affair 16.10 (106) to 6.12 (48).

The Blues’ 10-goal-to-three second half exhibited no signs of rust after sitting out the first week of finals.

Rosedale will now prepare for a tilt at its first premiership title since 2001 in two weeks’ time.

Heyfield made the first movement forward, but Rosedale rebounded strong off half back to open proceedings through Clarke inside of three minutes.

Jeremey Reid was keeping Heyfield full forward James Beha in close check as the Kangaroos looked to open their account in a quiet 15 minute period.

Adrian Cox was busy early and he drilled the ball into a high flying pack with Jesse Bedggood leaving Beha to take the tumbling mark in front of goal, however his shot on goal fell short.

Errant delivery into the Blues forwards saw Scott Anderson and Daniel Stevens continue to pick off the ball and send the Kangaroos clear of half-back.

The gridlock was broken when James Hammill combined with Adam Diamond, who slotted through the Blues’ second.

A hard chase and run saw Josh Stubbe tackle Jamie McIntosh to the ground and Cox swooped on the ball to send the Roos’ forward.

Again Bedggood took flight but was not able to hold the mark, before Beha earned a free kick via Reid’s push in the back, though his shot on goal again lacked the distance.

Kodie Woodland broke through to open with Heyfield’s first before Hammill slotted one through ahead of quarter-time to hand the Blues a two-goal lead.

Woodland sparked Heyfield with the first of the second term, after Matt Goodwin halted Adam Diamond in his tracks with a ferocious tackle that sent his side forward.

Bailey looked to be within scoring distance but decided to pass off and the Kangaroos defence was sublime in forcing the turnover.

Goodwin and Dale Fleming provided an entertaining battle as the plucky Blue’s pace proved useful in breaking packs and creating opportunities for the forwards.

A major to McDonald would be the first of a run of goals with Macreadie’s first from the pocket drawing the margin out to four straight kicks.

Stubbe got one back ahead of the long change but it was all Rosedale in the third.

The premiership term was a whitewash as the Blues forwards and midfield brigade came from everywhere to get in on the action.

McDonald added another to his match tally of three in the first two minutes of play.

Macreadie had his side’s second in quick succession, and added another when he out marked Jesse Jackway.

Jake Mowat caught Andrew Lambie on the move in a strong tackle which was deemed holding the ball, and the Blues had their fourth for the term.

Diamond made it five straight when the Kangaroos failed to clear the ball past centre half-back.

The goals flowed and a 17-point half-time margin blew out to more than 12 goals at the final change.

The final term was a formality as Rosedale bolted down its spot in the 2015 decider.

THE knock out semi-final saw Churchill keep its premiership defence alive with a sharp 11-point victory over Sale City to send the Dogs tumbling out of the competition.

A Churchill victory looked highly unlikely at some points in a game that ebbed and flowed.

Looking sharp from the onset City came to play in yesterday’s do-or-die final and was quick to put the Cougars on the back foot.

Holding Churchill to a straight kick in the opening term the Dogs took a five-goal lead into the break.

The Cougars rallied to outplay City in the second stanza and turned a 34-point deficit into a nine-point lead at half-time.

While the second half was more even on the scoreboard, the Cougars never surrendered the lead despite City charging at the closing stages.

City’s defence of James Versace, Shay Ferguson, Josh Barbetti, Abe Schuback and Tim DiMarco felt the effects of the Cougars’ quick delivery into their attacking 50 in the second and third telling terms.

Down at half-time, the Dogs needed to dig deep and start the third term on the front foot.

However, it was the Cougars that did just that, carrying on from where they left off in the second term with Hamish Towns and Darby adding to the scoreboard.

Towns added to last week’s match total of six with a further three, Darby booted four with Leigh McDonald chipping in with three as Churchill advanced to a preliminary final showdown against Heyfield.

Champagne midfielder Travis Brighton was instrumental in and around the contest and got things going for Churchill.

Williams and Nick Celima ran, at times, rings around the opposition midfield, Dillon Leys was a key figure in the ruck contests or setting up play in the forward line and Darby was the standout forward.