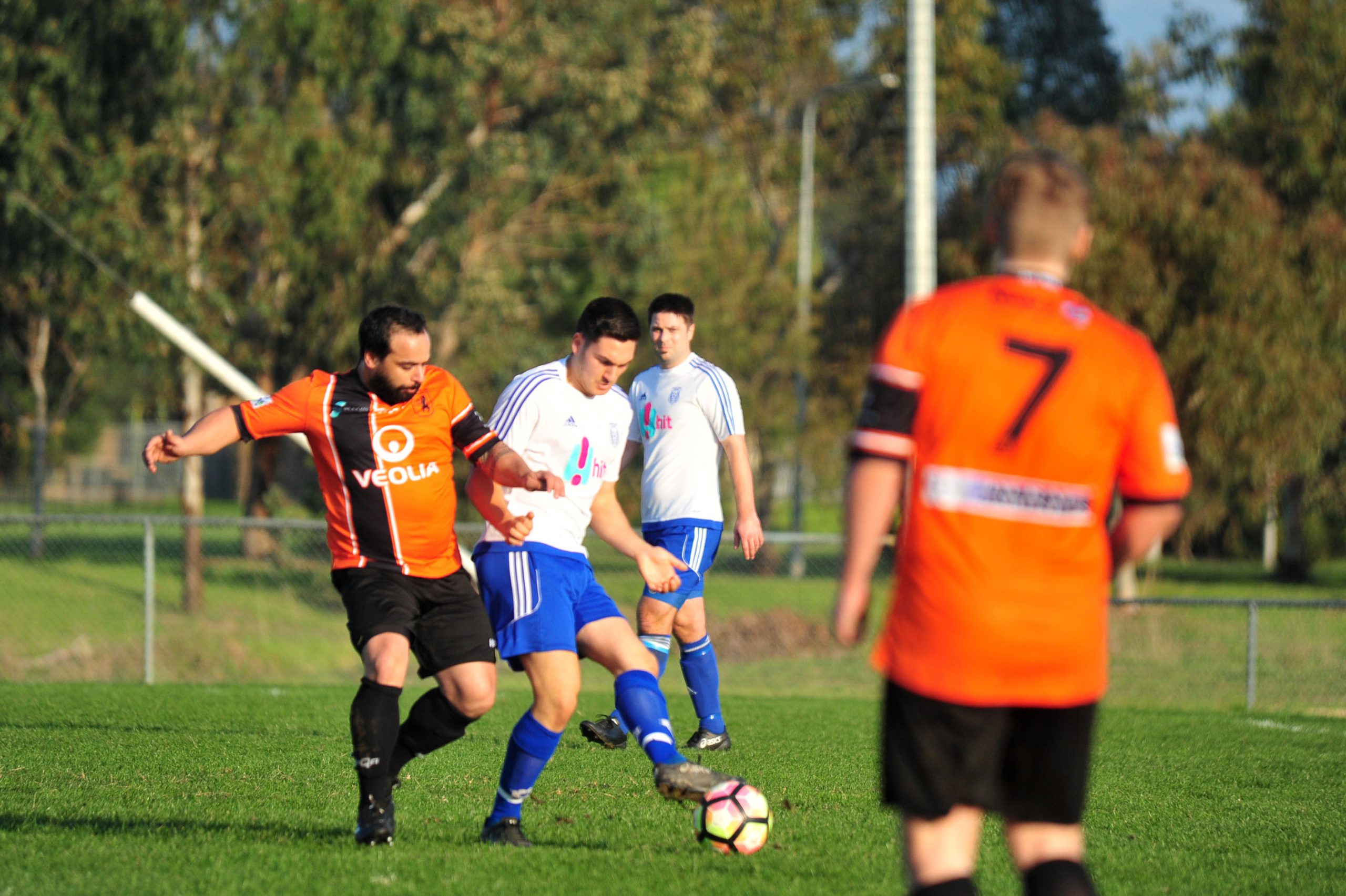 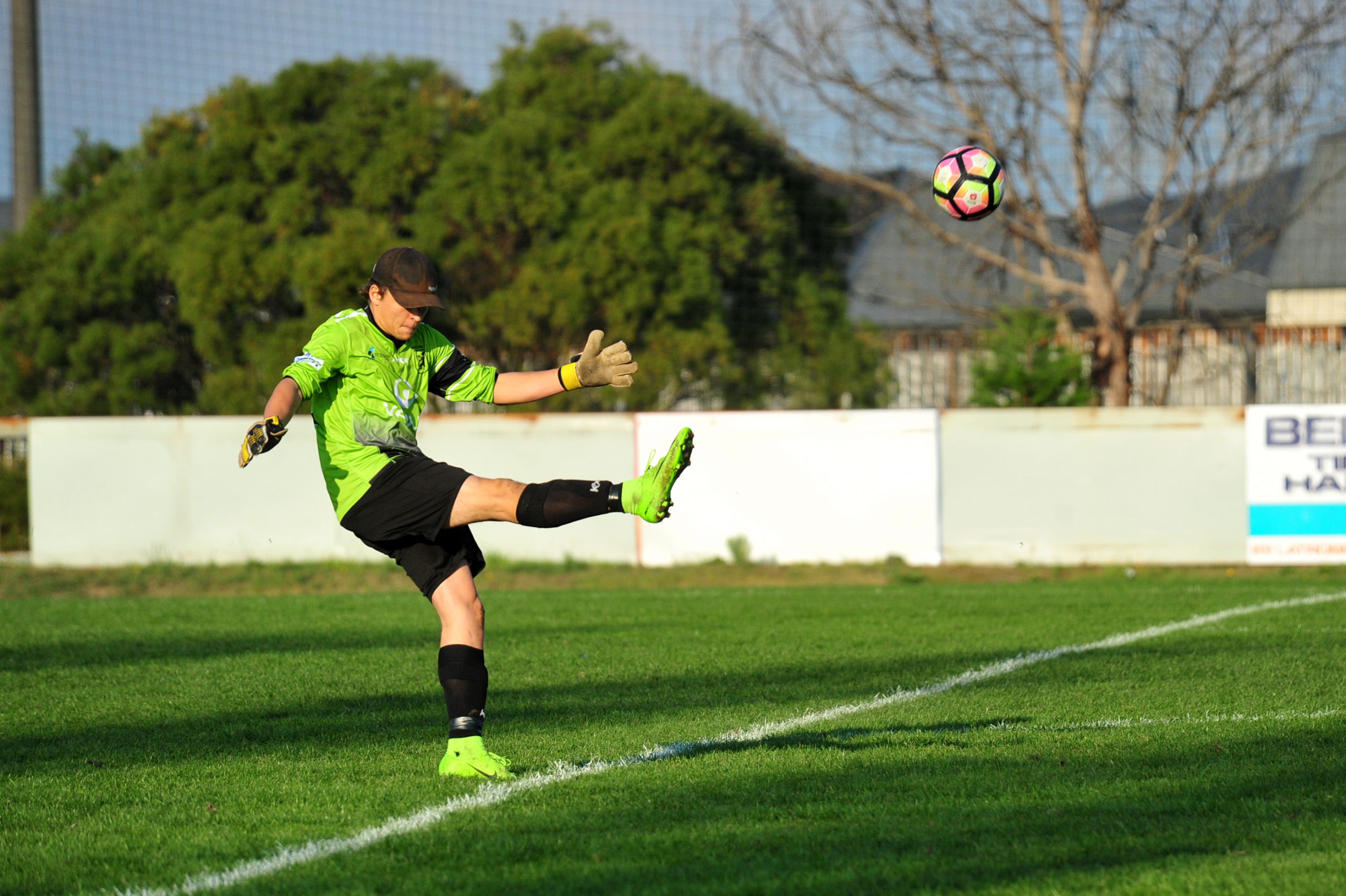 Falcons 2000 continued its push for the league championship with a decisive victory over Churchill on Sunday.

In cool and sometimes wet conditions, the Falcons were pressed early in the match.

Without usual strikers Tom Amaira and Jesse Kennedy, who were both out due to suspension, the forward zone struggled.

Churchill was competitive in a lively first-half with Matt McGrath and Glen McColl giving the Rams every opportunity.

In the role of centre forward, the Birds’ Conner Clarke continually drove the ball towards his forwards but without any result.

The Rams had chances in the lively first half but excellent defence from Stephen Beccega and Aaron Daniels kept Churchill at bay.

Falcons’ “Frank” Yousif had plenty of the ball and nippy winger Kevin Carcella was also in the fray.

Play was back and forward in a tense battle with Falcons securing three corners but were unable to score.

Two minutes before half-time a goal by Sam Amaira was judged off-side, much to the displeasure of the Falcons camp.

The Rams would have been pleased at their efforts at half-time to hold the league leader to a nil-all score line.

After the break, both teams played hard in the unusual conditions with bursts of rain followed by sunshine.

Falcons’ keeper Adam Brooker was tested twice by Churchill on a rebound but the guardian stood firm.

Jamie Pistrin proved dangerous to the Ram’s defence and his corner at 71 minutes to the box saw Jordan Kennedy loop it in over the advancing keeper to give Falcons a 1-0 lead.

Churchill through Peter Hyland and Braydon Dunne were trying to break down Falcons but their limited avenue to goal were blocked.

In a space of five minutes it turned into the Jamie Pistrin show as the young striker bagged a hat-trick with goals at 81st, 84th and 86th minutes to give Falcons a 4-0 win over an enthusiastic Churchill team.

With very little to play for, Monash’s clash against Tyers turned into a real slog as the muddy conditions made good play all but impossible.

The Wolves were quick on the ball with a good goal at three minutes from Ethan Lawrence, but then had to defend as the Lightning started to pressurise the Wolves into errors.

The score stood at 1-0 at the break but after the rest Tyers came out fighting and equalised two minutes into the second half with a long bomb from Budd Tanner.

Monash had to hang on and got itself out of jail with a goal in the 68th minute through Thomas Bramstedt to give them a 2-1 result.

Olympians had to fight back after half-time to beat Moe 3-2 in what was an important match for the Traralgon team.

A loss to Moe would have virtually given the league championship to the Falcons, but Olympians hung on to produce the goods in the second half to keep alive a faint chance of winning the league.

Olympians had to do it the hard way with goals to Moe in the 31st minute from Noah Kane and 40th minute to Matt Shearing.

Olympians were behind the eight ball in the second half, but three goals within four minutes meant the Traralgon team was able to secure a 3-2 lead.

The Red Devils had their chances as Olympians were reduced to nine players after send offs in the 73rd and 83th minutes, but Olympians hung on to win 3-2.

Four second-half goals from Newborough/Yallourn enabled the combine to overrun a confident Fortuna side.

Neither team could play well in the conditions but it was the Lions who caught Newborough/Yallourn on the hop.

Fortuna was reduced to 10 players just before the break and had to play out the second half in a depleted state.

The Fortuna goal was a wake-up call for the combine, which pressed forward trying to break the wall eventually equalising in the 66th minute from Deng Maica.

Newborough/Yallourn then went further with goals in the 80th minute from Mark Fairbrother and 83rd minute from Alex Van Vliet.

But a penalty at the death saw the combine run out winners 4-1.

Trafalgar won its first game over Sale in a goal-fest which produced seven goals.

Goal keepers from both sides were kept busy as forwards kept up their relentless attacks.

The Victory was on the board first at 27 minutes from Nathaniel Paredes and they held onto the sole goal advantage until half-time.

Trafalgar went 2-0 up after a mix-up saw another goal being posted in the 48th minute from Joshua Paredes.

Sale was not to be outdone replied in the 54th minutes through Nate Khamchom and pressed hard for the equaliser.

The Victory had other ideas and took a 3-1 lead in the 58th minute by Nathaniel Parades for his second.

It was goal for goal in the 68th minute when Trafalgar got another one, this time from Lloyd King which stretched their lead to 4-1.

Sale fought back with two quick goals from Josh Ryan and Nate Khamchom but they ran out of time after nearly over running the ailing Victory who eventually won the match 4-3.

Traralgon City inflicted its biggest win over East Gippsland, beating its opponent 8-1 in a feast of goals.

Leading goal scorer DJ Matar was kept to only two goals but it was the forward power of Jake Budija that scored a hat-trick.