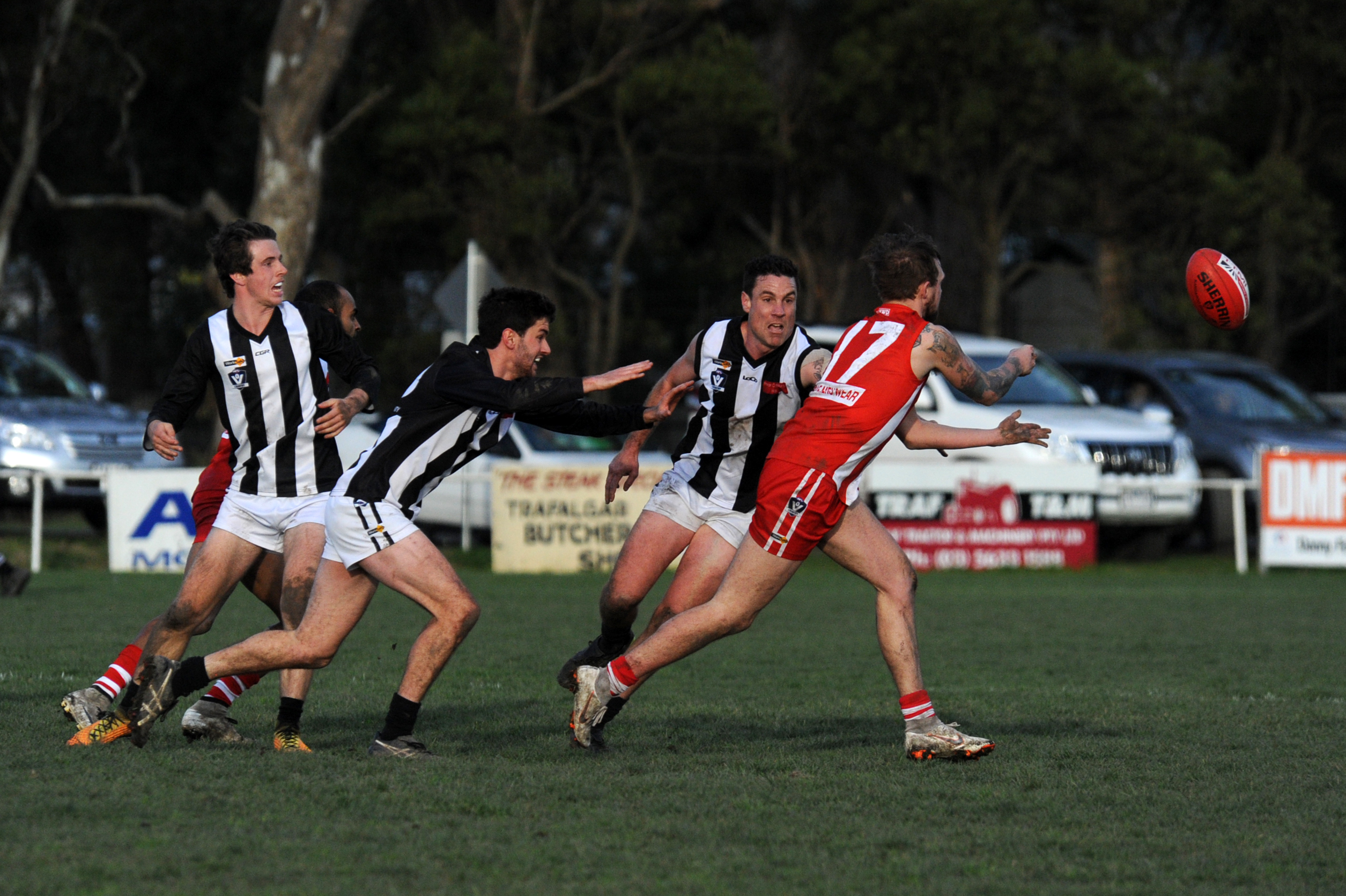 Trafalgar secured their position in the 2018 Mid Gippsland Football League senior grand final with an impressive victory over Yinnar, 9.10 (64) to 7.5 (47).

The Bloods went through season 2018 with a record of 17 wins from 18 matches, but that didn’t mean anything from the opening bounce of the second semi-final.

Yinnar, with departing coach Jaime Aitken, had finally put together a side he believed was capable of causing an upset and two narrow losses through the season to Trafalgar had taught the Magpies how good they would need to be.

A terrific opening quarter by the Magpies set the standard for the rest of the afternoon, with finals football delivering everything it should with hard running, big body clashes, lots of pressure and a very hot footy.

Yinnar grabbed an 11-point lead at quarter-time, but it was to be the biggest margin of the day, with Trafalgar starting to work their way into the contest during the second term.

The Bloods’ Tyson Leys continued his sensational second half of the season, with another best-on-ground performance.

Damien Mann gave his all, as did the likes of Brad Hamilton, Connor Noonan, Daniel Puglia and Jesse Stone.

Under pressure, the game style of Trafalgar stood up.

The result of their disciplined play was not to show its head until late in the game.

Even though the premiership favourites were slowly closing the quarter-time gap and cut it back to six at the major break and just four points at three-quarter-time, it wasn’t until the final quarter that Trafalgar managed to grab the lead with some beautifully-orchestrated zoning.

Yinnar, had their chances, but not enough of them despite the efforts of Danny Campbell, Mark Stockdale, Leigh Cummings, Luke Linton, Matt Dyke and Jim Dowling.

The Magpies had managed to keep their opponents to just five goals in the first three quarters, but it was the Bloods who added four goals from seven scoring shots in the final 30 minutes that showed they wanted the win more.

After a week’s break, Trafalgar have now earned another week off before waiting for their next opponent to have a shot at the title after next week’s preliminary final between Yinnar and Yallourn-Yallourn North.

Dean Macdonald kicked his 100th goal of the season and Yallourn-Yallourn North moved to within one win of a grand final berth with their 8.16 (64) to 6.4 (40) victory over Mirboo North yesterday.

There was no mention of it from the Bombers, but there was no question the painful memories of being bundled out of the 2017 finals series in straight sets after finishing on top had started to creep into the players’ minds.

It just so happened that the venue for the first semi-final was also the location for one of the Bombers’ most impressive performances of the season – a comfortable victory over Trafalgar – the question was whether they could repeat it when the pressure was on.

With so much on the line, the match started as you would expect, the frantic pace not giving either side much room to move.

The Tigers were peppering the goals but were not getting reward for effort.

The Bombers were going direct to key forwards Macdonald and Keenan Hughes and had the use of a slight breeze.

Macdonald looked in the mood to play.

His speed on the lead and accuracy under pressure was good to watch and his first goal for the game and 98th of the season was his side’s second and put them two points in front.

Macdonald got his second in the early minutes of the second quarter before Tigers coach Josh Taylor showed composure to find Jason Winderlich close to goal.

Yallourn-Yallourn North started to apply extra pressure deep into the second quarter but their efforts were not reflected on the scoreboard and with six more scoring shots the Bombers led by just 11 points.

Within three minutes of the third quarter, the league’s leading goal-kicker finally kicked his 100th of the season courtesy of a neat pass from coach Barrie Burnett.

Lack of discipline and a resultant 50-metre penalty by the Tigers gave the Bombers the break they needed early in the final quarter before Josh Taylor goaled to keep the Tigers in touch.

Moments later it was the coach of the opposing side that goaled to seal the game for the Bombers.

The Bombers now prepare for their preliminary final with a Yinnar side that is also dealing with a few tough decisions on the back of injuries received in their clash with Trafalgar.