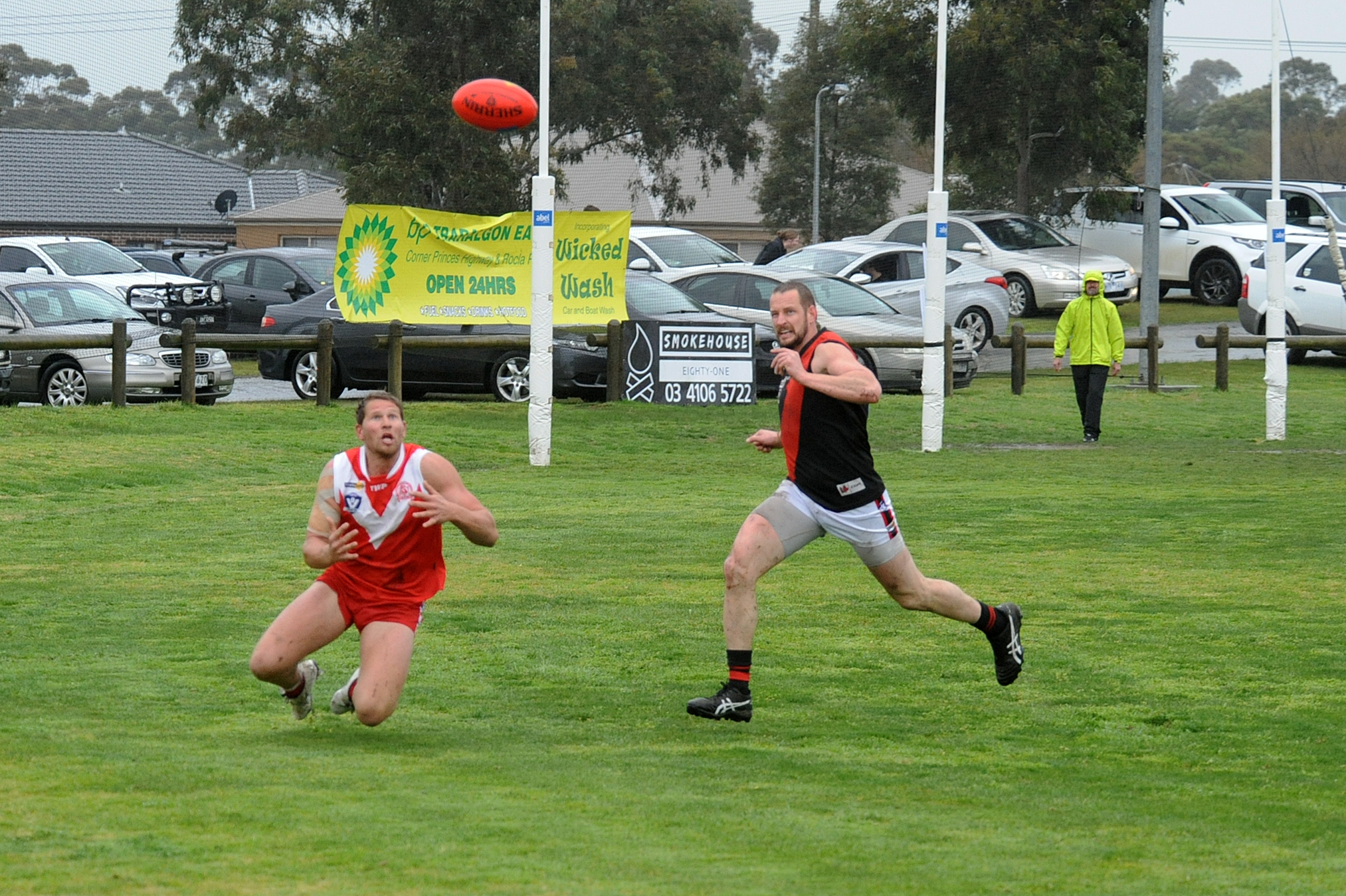 Minor premiers Yarram have overcome a sluggish start against Traralgon Tyers United in the second semi-final to win through to the North Gippsland League decider on Saturday, 14.10 (94) to 9.8 (62).

The Bombers came out with a score to settle in the opener, kicking four goals and one behind in difficult conditions to race away to a 12-point lead at the first break.

Yarram president Anthony Rodaughan said the Bombers were operating like a well-oiled machine in the early stages of the game.

“They came out of the blocks quick and they were making the play, got the centre clearances and their systems were working pretty well,” Rodaughan said.

“As it went on we got our systems back and we got the last goal of the quarter, so while they had the lead we started to feel as though the tide had started to turn.”

And it did. The Demons piled on six goals and held TTU to none as their midfield heeded the advice of coach Matt Scholz.

“The message at quarter-time was that we needed to lift the intensity,” Rodaughan said.

“People needed to persevere with what we do and we placed a fair bit of onus on the midfield to get on top in their positions and that’s what happened.”

Griffin Underwood started to clean up with clearances in the second term, Dan Vardy dominated in the ruck and the work of Chris Bruns and Liam Farley paid dividends on the scoreboard as Louis Rodauaghan kicked three goals in a row.

“We just moved the ball really well, really quickly and the defensive work of the midfield paid off,” Rodaughan said.

“They laid tackle after tackle because of the conditions and from the boundary you could hear the thuds as tackled were laid, so it was very hard, physical contest.”

Rodaughan said the Demons “pulled through unscathed” and would “enjoy the win then get back to the plan” of avenging for last year’s loss in the decider.

“It’s one step towards where we want to be and it’s pleasing, but there are plenty more steps to go,” he said.

With a fortnight to go before the decider, Yarram will hold an interclub game on Saturday to “simulate a match work-out”.

Rodaughan said training on Tuesday “might be a little gentle” because of the physicality of Saturday’s contest “but then we’ll get to really sharpening and lifting the tempo”.

Liam Bentley missed with groin soreness but will “be in the wings and back at training” according to Rodaughan, who said the Demons were now looking at a full list for the grand final.

Coach Matt Scholz will take part in this weekend’s practice match after some weeks off through illness and his fitness for the decider will be assessed at a later date.

TTU will now face Churchill in the preliminary final this weekend.

Churchill have won through to the preliminary final after a stunning third quarter effort blew the game open yesterday.

The Cougars trailed by four points at half-time but piled on an astounding 10 goals and five behinds to the Bulldogs two goals and one behind to lead by 48 points at the final change.

Sale City made a last-ditch effort to claw their way back in the final term with the first three goals of the quarter but the damage was done as Ben Kearns scored the final two of the day to take his tally to seven and help the Cougars through to the preliminary final against TTU this weekend.

Blake Slater kicked three for Churchill and Nick Grainger did his best for the Dogs and finished with a bag of six.