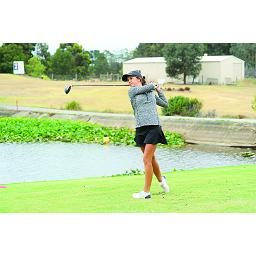 In blustery second round conditions, Burdett kept his composure as the frustration of contenders resulted in dubious decision-making and unforced errors.

Tim Hart led the first round with an equal course record of 63 and led Burdett by three strokes, but on day two gave them all back on the ninth hole.

After fishing the ball out of the creek adjacent to the 10th tee, a frustrated Hart four-putted for a seven.

Burdett, meanwhile, was hitting fairways and greens and calmly holing birdie putts – eight of them in all.

His playing partners nominated as highlights a chip-in on nine in the first round and a near eagle on seven in round two after a pin-high chip from the left-hand side.

His only second round bogeys came at the relatively friendly par three fifth hole and the challenging par three 10th.

With the exception of Burdett, those on the leader board became frustrated as the west wind knocked down what appeared to be excellent shots.

Christopher Woods led by two then gave them back of consecutive holes while Mitchell Brown and Josh Younger had good moments.

The experienced Matthew Millar was never far away and Tim Hart regained momentum with a long birdie putt on 12 and a second eagle in two days on 16.

At their final holes, Hart and Burdett stood 20 metres apart, both eyeing the other.

Burdett was on the first green with a one-shot lead eyeing a birdie putt of less than two metres which lipped out while Hart turned to play his drive down 18.

Hart knew he needed a birdie on the 18th to force a play-off and drove 15 metres from the green but with an awkward downhill lie.

The chip was flubbed to the front edge and, inexplicably, Hart again four-putted to give Burdett a three-stroke victory.

“The greens are about the best we’ve played on and considering there has been no rain, the fairway[s] were terrific,” Burdett said.

In the women’s event, the second female pro-am to be held concurrently with the men, world-ranked UK professional Felicity Johnson was a five-shot winner from Australian pair Jessica Stirling and Melissa Taylor.

“All up it was another successful event for the Traralgon Golf Club,” McLeod said.

“The guys really like coming here. This year especially it has given the players a valuable lead up to the Vic Open but we always look forward to coming back here to Traralgon as part of the Gippsland swing.”